In this series of posts, I revisit books that I disliked as a child or teenager and see if my opinion has changed. For the list of upcoming books, see this post (though I’ve since cut Tess because I know I will just hate it again!) The three other entries in this series so far are To Kill A Mockingbird , The Handmaid’s Tale, and The Color Purple. This is also #7 of my 20 Books of Summer. 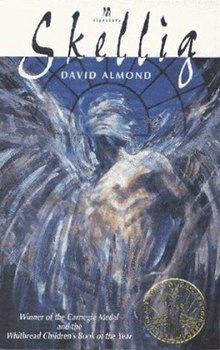 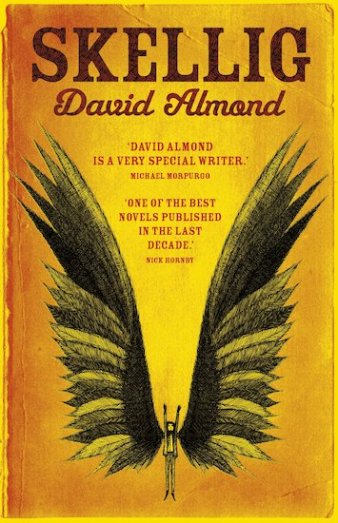 I first read Skellig around the time it came out, when I was twelve years old. I furiously hated it. (Seeing the title still makes me feel angry even now!) Although I obviously did not enjoy the novel, I think the reason I felt such ire towards it was because it happened to come out just as I was clarifying my critical thoughts on children’s fiction, which had been brewing for the past two years or so. Skellig won both the Carnegie Medal and the Whitbread Children’s Book of the Year, and to me, epitomised ‘the kind of book adults think children ought to like’. I’d been wary of award-winning children’s novels since a string of bad experiences with Newbery Award winners when I was much younger, and nearly didn’t pick up the first Harry Potter solely because it had won prizes. (Interestingly, checking the novel’s Wikipedia page, it turns out that Harry Potter and the Philosopher’s Stone won basically all the UK awards that were voted for by children, but was only shortlisted for awards voted for by adults. If I’d known this at the time, it would definitely have added fuel to the flames!)

I have a fairly clear memory of the basic plot of Skellig. Boy meets decaying angel in his garage while he is praying for his ailing baby sister to get well. I also remember why I hated it so much. My biggest complaint was what I might now call the ‘magical realist’ elements of the book. I was hugely frustrated with the angel, the idea that he might not be real within the world of the book (I was of course used to reading science fiction and fantasy; fantastical elements per se were not a problem) and that he only existed to represent something else. This made the whole book feel pointless to me. When my mum read Skellig, I remember her saying: ‘I think the angel represented the boy’s hope; so the angel got better as he got more hopeful’. This interpretation filled me with utter disgust! I also had more minor criticisms of the book. Aesthetically, it didn’t work for my imagination. I didn’t like the way the angel intersected with the ordinary world, demanding Chinese takeaway; this just seemed ludicrous to me. I also couldn’t relate to the boy’s concern for his sister (I think adults often forget that our instinctive horror at the idea of an ailing child or baby will not necessarily be experienced by children who are much closer to the character’s age). Finally, I just found it boring. 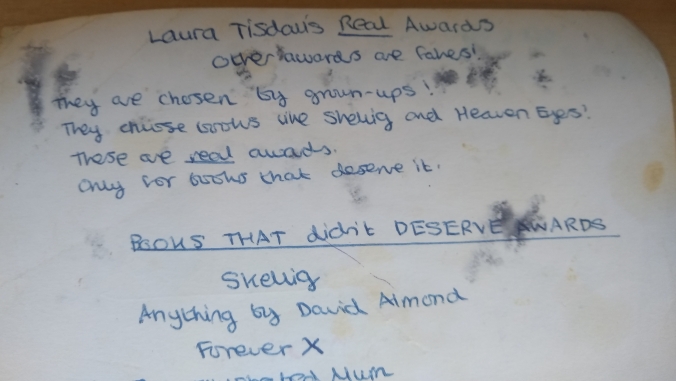 The good thing about Skellig, though, was that it started my career as a book reviewer. It was my rage at Skellig that led me to start making lists of the books I thought were really ‘deserving’ of awards, and eventually to start recording everything I read. So I did have something to thank the book for.

Where to start? I was SO right about Skellig.

I’m sure there are both adults and children who genuinely love this book. However, what struck me most about rereading it as an adult is how performative it is. Almond has his characters utter so many faux-profound statements, which gives the impression that the book is saying something deep – but it isn’t actually saying anything at all. There’s a void at the heart of this novel. My mum’s interpretation about ‘hope’ seems as good to me as any, because basically this is a book that allows you to project what you want onto it. Here are some examples of Almond’s platitudes; while they all sound the same, they’re actually spoken or thought by a range of different characters, including some random elderly people who turn up to dispense wisdom, then depart:

‘He said we were surrounded by angels and spirits. We must just open our eyes a little wider, look a little harder.’

‘You just keep believing. And everything will be fine.’

‘Keep on moving. That’s the thing. Keep the old bones moving. Don’t let everything seize up.’

‘There was the loveliest lass on the trapeze. You could swear she could nearly fly.’

‘Her dark eyes looked right into me, right into the place where all my dreams were.’

Skellig very much presents an adult’s view of a child’s internal landscape, an idealised, sentimental view of childhood imagination. I’m sure that some readers can relate to this, but it felt utterly alien to me. We’re supposed to be swept away by the beauty of this fable (and I think that’s what it is; it certainly isn’t a folk tale or fairy story, which have far more internal logic) but it just made me feel a bit sick. I’m sad to think of all the children who have surely been subjected to studying this at school.

This book unfortunately concludes with the narrator and his parents considering a couple of ‘meaningful’ names for the baby, including ‘Persephone’ and ‘Angela’, and finally deciding to name her JOY.

14 thoughts on “The Reread Project: Skellig”