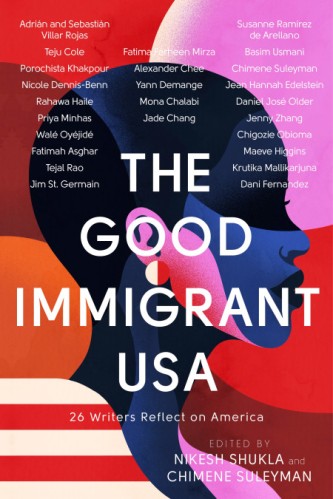 The Good Immigrant USA, edited by Nikesh Shukla and Chimene Suleyman, is the American follow-up to Shukla’s previous edited collection, The Good Immigrant, which focused on Britain. Both collections feature a range of essays from immigrants to these countries talking about their own experiences and challenging stereotypes, but for me at least, the two books have a very different feel. The Good Immigrant was more personal and more anecdotal, and it was definitely funnier; while there were, of course, essays that didn’t employ humour at all, many other contributors used it to effect to make serious points, such as comedian Nish Kumar’s ‘Is Nish Kumar A Confused Muslim?’, about becoming a racist meme, and actor ‘Miss L’s’ ‘The Wife of A Terrorist’, which explained how, as a brown woman, she’s always typecast as a traditional Middle Eastern wife, often of a terrorist.

In contrast, The Good Immigrant USA takes a more literary and a less journalistic tone, and many of the essays require more sustained effort, although the effort is repaid. It feels also more wide-ranging, reflecting the US’s racial mix, from Adrián and Sebastián Villar Rojas’s essay about the history of Argentina’s colonial encounters, ‘Juana Azurdy Versus Christopher Columbus’, to Porochista Kapoor’s meditation on becoming pigeonholed by your ethnic identity, ‘How to Write Iranian-American, Or The Last Essay’. There’s also a didactic earnestness in a few of the essays in this collection that’s missing from their British counterparts: for example, Jim St. Germain’s essay on Haiti, ‘Shithole Nation’. None of this makes one collection superior or inferior, but they aren’t simply transatlantic versions of each other. The Good Immigrant had more of an impact on me, but I think this was partly the result of having read much less about race and immigration when I encountered it.

One feature of The Good Immigrant USA which wasn’t present in The Good Immigrant is the inclusion of essays by white or white-passing immigrants as well as ethnic minorities. This perhaps says something about the two countries’ attitudes to immigration, but I also found this a helpful and interesting addition to The Good Immigrant USA, allowing the writers to explicitly reflect on white privilege while also reflecting the experience of growing up caught between two cultures. Maeve Higgins writes well about the long tradition of Irish immigration to the US (‘Luck of the Irish’), but I was particularly captivated by Jean Hannah Edelstein’s ‘An American, Told’ (I also loved her memoir This Really Isn’t About You), which focused on having a British mother and Jewish father, and growing up between Britain and the US. Personally, having also moved between the two countries, I identified with what she said about not really feeling British or American. Although I fall much more on the British side of the equation, I still sometimes fall through those cracks (as a recent discussion about ‘frowns’ on Twitter reminded me; I’m on the Americans’ side with that one!). 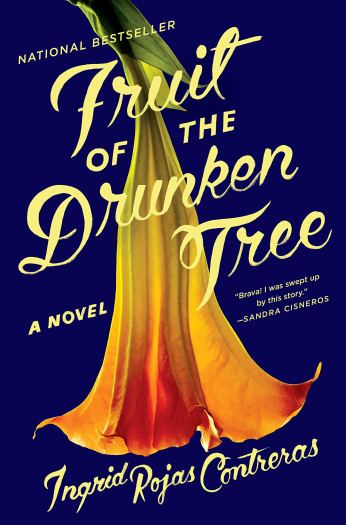 Ingrid Rojas Contreras, who is from Bogotá but now lives in San Francisco, could easily have contributed (and I suspect, very interestingly) to The Good Immigrant USA. Her debut novel, Fruit of the Drunken Tree, draws on her experience of growing up in a gated community in Colombia in the late 1980s and early 1990s. It focuses on two children, Chula and her sister Cassandra, and the close relationship they develop with their teenage maid Petrona, who is from what they term the invasión, one of the guerrilla-occupied shanty towns that have grown up on the outskirts of Bogotá. As the girls witness the rise of drug lord Pablo Escobar and the violent incidents that surround them, they cling more tightly to Petrona as an emissary from an outside world they do not understand. But their family’s connection with Petrona will also bring them into danger.

Contreras is obviously a gifted writer, and the afterword of this novel, which explains how it links to her own personal experience, is exceptionally moving. Her website says that ‘She is working on a family memoir about her grandfather, a curandero from Colombia who it was said had the power to move clouds’, and I’d absolutely love to read that. Having read only one other novel set in Colombia (Julianne Pachico’s The Lucky Ones, which also kicks off in the early 1990s) this was refreshingly different, in some ways, from what I usually read. However, it also rehashes some familiar tropes about children encountering a conflict that they don’t understand (I thought the novel would have been much more interesting if narrated by the mother), and the pacing is askew, with virtually everything that happens squashed into the last hundred pages. I found myself wondering if Contreras had been tripped up by trying to translate her own childhood into fictional form, and if her life-writing might work better for me. Fruit of the Drunken Tree is effective page-by-page, but I found the book as a whole frustrating.