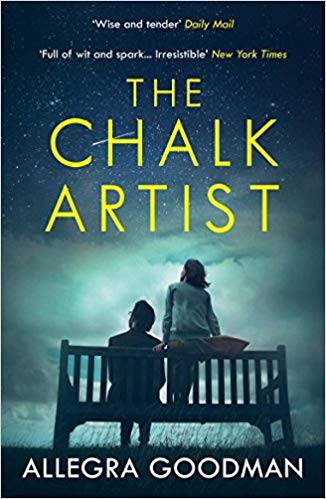 Allegra Goodman’s latest novel, The Chalk Artist, set in Cambridge and Boston, is written in deliberately hallucinatory prose, making every element of the story feel heightened. This could tip into overkill but worked for me because of the subject-matter. Teenage Aidan is academically bright, but spends all his free time playing an MMORPG created by the company Arkadia (think World of Warcraft, which weirdly also exists in this universe even though linked games EverWhen and UnderWorld are clearly intended to mimic it – for example, one incident in the book obviously mirrors WoW’s famous Corrupted Blood incident in 2005). Aidan’s sister, Diana, scrawls endless, intermittently relevant answers to her teacher’s questions in her English journal, writing, among other things, about how worried she is about her brother. Diana’s teacher, Nina, is determined to get through to her students and prove that she can do something useful in the world – not simply exist as the daughter of Arkadia’s boss. Finally, Nina’s boyfriend, Collin, is the ‘chalk artist’ of the title; he’s incredibly gifted at sketching but doesn’t mind wiping his creations away when he’s done. Collin is also pulled into UnderWorld’s web after becoming a concept artist on a new game – where, he realises, his art is just as transient as chalk, but he’s no longer the one who destroys it.

The Chalk Artist picks up on themes that appeared in the two other Goodman novels I’ve read, Intuition and The Cookbook Collector – both of which were tantalisingly intelligent but spread themselves much too thin. Most interestingly, it starts to explore what it means to be gifted, and what we owe to our gift. Collin is preternaturally talented at art, but precisely because of that, he’s not attracted by the things that draw lesser artists – he’s dropped out of art school and loves the fact that nothing he makes lasts. This recalls a secondary character in Intuition, who refuses to play lab politics and abandons his career even though he’s a scientific genius. Disappointingly, however, The Chalk Artist doesn’t quite follow through on this theme when it comes to Aiden. Perhaps because of his age, Goodman implicitly endorses the idea that UnderWorld is bad for him, and pursuing good grades in the ‘real world’ is better, especially once he begins to be inspired by Nina’s tutoring. This is undercut slightly by the suggestion that connecting deeply with poetry is a fantastic – in the literal sense of the word – experience in its own right, but I’d like to have seen this novel take gaming a bit more seriously.

On the other hand, Goodman writes brilliantly about the experience of being immersed in a VR world; EverWhen and UnderWorld are so compelling precisely because she avoids the temptation to get bogged down in technological detail. I haven’t seen virtual reality written this well since a few classic novels from my childhood (1990s children’s fiction was a little obsessed with virtual worlds): Gillian Cross’s New World, Stephen Bowkett’s Dreamcastle, Helen Dunmore’s Fatal Error. All of these, like The Chalk Artist, emphasise the dangers of getting lost in something that is not real; but the way they describe what draws people into such worlds makes them more than simple morality tales. I’d hoped The Chalk Artist would be a 4.5 star read for me, and it isn’t quite; but it’s definitely a solid four stars, and my favourite so far from Goodman.

Robin Oliveira’s Winter Sisters, set in Albany in 1879, is a loose sequel to My Name Is Mary Sutter, which followed the eponymous Mary, a midwife striving to train as a doctor during the American Civil War. When I reviewed the first novel, I wrote that it was almost classically tragic in the hardships visited upon its central character, and upon her mother and sister. However, I felt that this worked in the context of that story, emphasising Mary’s superhuman determination to pursue her chosen career in the face of institutional misogyny and the hazards of wartime. In contrast, Winter Sisters feels both melodramatic and a little exploitative in the way it explores its characters’ misery. The novel kicks off in the way it means to continue: two reasonably prominent secondary characters from My Name Is Mary Sutter are unceremoniously dispatched in a blizzard to set up the plot-line of this novel. Their deaths occupy a couple of sentences, almost as if Oliveira was keen to get this set-up out of the way so she can move on to the central suffering of the story. For after these characters are killed, it’s discovered that their two young daughters, Emma and Claire, are missing, believed dead in the snowdrifts that have buried Albany.

Mary, a close friend of Emma’s and Claire’s family, determines to seek out the girls, but what she discovers is horrifying. Spoilers [highlight to read]. Emma and Claire have been kidnapped by two men and kept imprisoned in a cellar for weeks – during this time, Emma has been regularly raped and beaten by one of the men. Claire has been spared similar treatment because she is under the age of consent – which at that time was just ten. Spoilers end. The rest of the novel is devoted to exploring the aftermath of the girls’ fates, including an extended courtroom sequence. While Winter Sisters is well-written and makes careful use of historical detail, I did find myself questioning the need to cover this story in such detail. Oliveira’s afterword notes explicitly that she was inspired by the #MeToo and #TimesUp movements, but by choosing such an unquestionable case, she fails to draw parallels between the past and the present and instead underlines the difference of the past. I also felt uncomfortable with the way she wrote her child characters, who are reduced to symbols of innocence and have little voice in the novel. If My Name Is Mary Sutter tipped towards tragedy, Winter Sisters wallows in it.

I’m now back in the UK but am still away from home travelling for work, and so may take longer to reply to comments than usual.