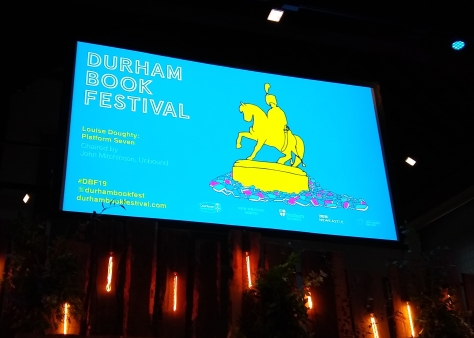 One of the (many) things I love about living in Newcastle is what brilliant literary events we have in the north-east, and the highlight of the year is always the Durham Book Festival, which never fails to have an excellent line-up at relatively affordable prices. I headed to two events there last Saturday and am going to two more next Saturday, so here is the first installment of my thoughts!

The John Murray Proof Party was not one I was going to miss, as it offered three proof copies of upcoming 2020 releases as well as a discussion with the authors.

The three books in question were:

All The Water in the World (January 2020), Karen Raney’s debut novel, which is told from the perspective of Maddy, a sixteen-year-old girl with cancer, and her mother, Eve. I was intrigued by the setting – the book takes place mostly in Washington DC and at a lake house in Pennsylvania – and as I, like Raney, have fond memories of visiting a lake in Pennsylvania as a child, as well as growing up in DC, I’m interested to see what she does with these places. Raney talked about wanting to show a ‘sound’ relationship between a mother and daughter that’s under great strain, which I liked – as she said, too many parent-child relationships in fiction are fundamentally dysfunctional. She also enjoyed writing from the perspective of a teenager, finding it easier to imagine, in Zadie Smith’s words, ‘the I that is not me’. I wouldn’t necessarily have bought this novel myself, as the premise sounds a little too familiar, but I’m looking forward to reading my free copy.

The Year Without Summer (February 2020) is Guinevere Glasfurd’s second novel. This sounds incredibly ambitious, using six voices – ranging from Mary Shelley in Switzerland, John Constable in Suffolk and a female farm labourer in the Cambridgeshire Fens – to tell the story of the eruption of Mount Tambora in Indonesia in 1815, the devastation of local communities, and the global impact of the ash cloud that led the ‘seasons to fail’ in the following year. I love the idea of looking at a period of historical climate change, and linking disparate places through this weird weather. Glasfurd spoke about how, during her research, she found that Tambora was ten times bigger than the eruption of Krakatoa in 1883, and yet very little is known about it and it wasn’t reported for a year after it happened. She was also very interesting on wanting to challenge Constable’s bland image as the painter of ‘The Hay Wain‘, speaking of the vivid oil sketches that he completed in that year. I hadn’t heard of Glasfurd before this event, but this all sounds great to me.

The Ninth Child (March 2020) is also Sally Magnusson’s second novel, though she has also written a memoir about dementia called Where Memories Go and a number of other things. This book is set in the Trossachs in Scotland, specifically ‘on the line between the Lowlands and the Highlands’, and deals with the building of a waterworks at Aberfoyle in the mid nineteenth century that was intended to supply fresh water to Glasgow to prevent another cholera epidemic. Its three narrators are an elite woman called Isabel, a navvy’s wife called Kirsty, and Robert Kirk – the legendary seventeenth-century minister who wrote about ‘the secret commonwealth’ of fairy and was believed to have been taken by the fairies upon his sudden death. Magnusson said that she wanted to explore what might happen ‘if Robert Kirk came back’, so it sounds like there’s a hint of magic in this historical novel. I very much enjoyed Magnusson’s first novel, The Sealwoman’s Gift, and I can’t wait to see what she does with this premise.

At the end of the event, we were all given copies of these three books in a gorgeous Two Roads tote bag, which was a present in itself! 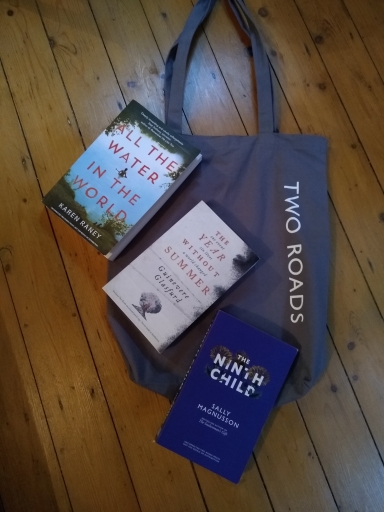 The second event I went to last Saturday was a discussion between Louise Doughty, whose new novel, Platform Seven, is just out, and John Mitchison from Unbound.

When I first heard the premise of Platform Seven, I described it as ‘Point Horror meets literary thriller’, but you can judge for yourself:

Platform Seven at 4am: Peterborough Railway Station is deserted. The man crossing the covered walkway on this freezing November morning is confident he’s alone. As he sits on the metal bench at the far end of the platform it is clear his choice is strategic – he’s as far away from the night staff as he can get.

What the man doesn’t realise is that he has company. Lisa Evans knows what he has decided. She knows what he is about to do as she tries and fails to stop him walking to the platform edge.

No one is more desperate to understand what connects them than Lisa Evans herself. After all, she was the first of the two to die.

I don’t seem to have cross-posted my Goodreads review of this gripping and chilling novel to my blog, but you can find it here.

Doughty started off by saying that she sees Platform Seven not exactly as a ghost story, but as ‘a novel narrated by a dead person’, and for me, this set the tone for the rest of the event. She explained that she was envisaging Peterborough railway station as a kind of ‘purgatory’, as, due to growing up in the East Midlands and attending university and work in Leeds, Norwich and London, she seemed to have spent a lot of her life waiting there in the freezing cold! However, she also reflected, later in the event, that it was exactly when she no longer had a reason to go to Peterborough, after her mother’s sudden death, that she ended up setting a novel there and spending a lot of time at the station doing research – so the novel itself was part of the grieving process. She wanted to capture ‘an affectionate portrayal’ of Peterborough and its inhabitants (and in my opinion, she definitely succeeds) – emphasising the individuality and significance of each of her characters, whether they’re a security guard or a station manager.

I managed to ask her at the end of the event about how, as a novelist, she handled the melding of horror and thriller in Platform Seven, and she explained how the inclusion of horror elements allowed her to explore certain themes in a different way – imagining Peterborough station as a kind of portal for unquiet souls allowed her to explore her characters’ hidden motivations in a different way (Lisa, the dead narrator, also has a limited ability to see into other people’s minds, so offers a kind of omniscience). She also argued that ghost and horror novels tend to be set in traditionally spooky places like an old manor house, but why shouldn’t Peterborough station be a portal? – to which I say YES, bring it on, because these traditional settings are something I find very tiring in Gothic fiction (I loved Ruth Ware’s recent chiller set in a ‘smart house’, for example). Basically, she concluded, she’s ‘greedy’ – she doesn’t want to be restricted by genre in the things she can explore. I love cross-genre fiction, so this all sounds great to me, and Platform Seven would be a perfect read for the RIP Challenge, or anyone wanting something creepy for Halloween!

I’ll be back at the Durham Book Festival next week, heading to an event with poet Raymond Antrobus as well as a discussion with Naomi Booth and Sunjeev Sahota. I don’t think I have many readers from northern England, but is anyone else planning to attend anything at this festival? (And if anyone is wondering, Durham Book Festival didn’t actually sponsor me to write these posts, I’m just a massive geek…)