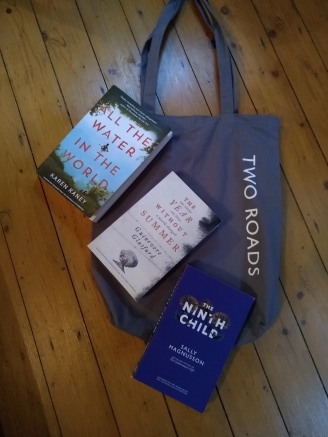 Last autumn, I went to the John Murray Proof Party  at the Durham Book Festival, heard three fascinating women talk about their upcoming early 2020 novels, and picked up free copies of the books (published by John Murray’s Two Roads imprint) in a great tote bag. I’ve now read all three and am here to report back!

In reverse order of preference…

I found Guinevere Glasfurd’s account of the research and background to her second book, The Year Without Summer, the most engaging to listen to at the festival. Set in 1815 and 1816, the novel explores the aftermath of the eruption of Mount Tambora in Indonesia through multiple narrative voices scattered across the globe. I loved the idea of protagonists linked by an abrupt and disastrous change in climate – the eruption led to cold, stormy weather and crop failures across Europe and North America as the rising ash cloud covered the sun. However, I didn’t feel that Glasfurd pulled off this incredibly ambitious premise – the reader’s attention is simply too divided, and the only narrator who really came to life for me was Fenland farm labourer Sarah.

The Year Without Summer is out now.

I was least interested in reading Karen Raney’s debut, All the Water in the World, simply because I thought that the premise – a teenage girl facing cancer – was so familiar in fiction. However, the novel is also an intelligent look at a close mother-daughter relationship that comes under intense strain. The book alternates between the mother Eve and daughter Maddy’s perspectives, and between the present and the past. Both Eve and Maddy are refreshing narrators; they avoid falling into the tropes that they might have occupied (distressed mother who is characterised as nothing but a mother; self-absorbed and rebellious teenager). Raney doesn’t bring anything especially new to the table, except a few interesting chapters on Maddy’s involvement in the climate protest movement and how she relates the climate catastrophe to her own impending death, but she writes well, so I’d be interested to see what she does next.

All the Water in the World is out now.

Having very much enjoyed Sally Magnusson’s debut, The Sealwoman’s Gift, I was excited to get hold of a copy of her next novel, The Ninth Child, and it didn’t disappoint. Set in the late 1850s, the novel focuses on an ambitious engineering project at Loch Katrine that aims to supply fresh water to Glasgow to reduce the impact of cholera epidemics in the city. Isabel Aird has been drawn reluctantly into the project after her husband accepts the post of doctor, serving the navvies who are frequently injured in the course of the excavation. Purposeless and lonely, Isabel nurses the silent grief of a series of stillbirths. She is drawn in by a charismatic minister, Robert Kirke, who mysteriously appears and disappears on the shores of the loch. Kirsty, a displaced Highlander working for the Aird family, watches Isabel and Robert anxiously; she knows much about the fairy folk, and suspects that Robert has a dark history and an even darker purpose.

Magnusson pulls together what might seem to be a rather unlikely premise with great skill. For once, comparisons to Sarah Perry’s The Essex Serpent are fully deserved – if anything, I liked The Ninth Child better, because it treads more original medical historical ground and because its central protagonist is much more appealingly flawed. I especially enjoyed a small side-plot about Queen Victoria and Prince Albert visiting the area to marvel at the skill of the works – both royal narrators are hilarious! I wondered if Magnusson’s use of multiple voices might also make this novel feel too fragmented – there are a number of omniscient sections alongside bits from the royals, Isabel, Kirsty and Robert – but it somehow all works, although Kirsty is very much a member of the supporting cast rather than having a character arc of her own, which is a bit of a shame. Still, totally absorbing.

The Ninth Child is out on 19th March.

Have you read any of these novels? What did you think?