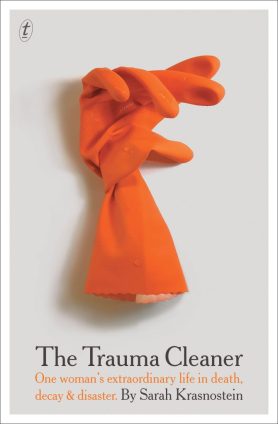 Sarah Krasnostein’s The Trauma Cleaner is a book it will be difficult to forget in a hurry. Krasnostein documents the elusive life of Sandra Pankhurst, who runs a ‘trauma cleaning’ business in Australia. In short, Sandra and her team are brought in to clean up houses after lives that have gone terribly wrong, whether that’s because their resident has committed suicide, died alone and undiscovered for weeks, or – as in most of the stories recounted in this book – has taken to hoarding. This is a highly skilled as well as labour-intensive occupation. Sandra is certified as a crime and trauma biorecovery technician, and knows everything about what she needs to deal with different kinds of stains, rubbish and smells: ‘a quarter of a teaspoon [of clove oil] to half a litre of water’ for black mould; hospital-grade disinfectants Multi-Task and San-Sol to strip surfaces of stains and remove bodily fluids; for blood, ‘you would know by the colour how deeply it has gone into the carpet… we would spray solution all over the carpets to see whether there are droplets of blood, it illuminates the blood. This tells us where we’ve got to work and what we’ve got to work on.’

This sounds like Sandra is excavating a crime scene, and there are some similarities between her work and that of a team charged with investigating a murder. When her clients are living, Sandra is required to probe gently into their pasts to try and understand a little of what has led them to hoard – in order to persuade them to jettison at least most of the rubbish. As Krasnostein so aptly describes, this requires formidable social skills. ‘One of Sandra’s talents is that she is superb… at instantly conveying a bespoke blend of respect, warmth, humour and interest that establishes a basic human equity’. Many of Sandra’s living clients, somewhere along the way, have lost faith in themselves and their own worth, and Sandra helps them to regain this. Krasnostein speculates that this is because Sandra has lived a life that was itself filled with so much trauma. Abused as a child, Sandra underwent gender reassignment surgery in the 1980s in the face of considerable opposition from the Australian medical establishment, then was raped and assaulted during a period of time as a sex worker. From these foundations, she built a ‘respectable’ life for herself as a wife, President of the North Brighton Chamber of Commerce and a small business owner.

Krasnostein is rightly impressed by Sandra’s resilience, and, in telling her story, she makes the right choice, I think, to remain as a largely invisible presence, unlike the intrusive narration of Rebecca Skloot in The Immortal Life of Henrietta Lacks. However, given the state of Sandra’s memory – which is unsurprisingly riddled with gaps and contradictions – Krasnostein must have done a considerable amount of behind-the-scenes work to put this story together at all, and it’s when the stitches start to show that I found The Trauma Cleaner a little frustrating. The book alternates between chapters that tell Sandra’s own story and chapters that focus on her trauma cleaning business in the present day, and I wanted to hear less about Past Sandra – who is necessarily unknown and incomplete – and more about Present Sandra. Krasnostein also has the unfortunate habit of repeatedly telling us how wonderful Sandra is (‘the great and wondrous energy that Sandra manages to generate‘) despite the fact that Sandra’s particular qualities come across much more clearly when Krasnostein tells us about concrete actions that Sandra has performed in taking care of her cleaning clients. At times, we get the sense that Krasnostein’s admiration for Sandra is battling with anger at Sandra’s refusal to face up to certain things in her life, such as her abandonment of her wife and her two very small sons when she realised she identified as a woman. And yet, insofar as this book seems to have been written as a kind of love letter to Sandra, Krasnostein is restricted by her own reasons for writing it in the first place. 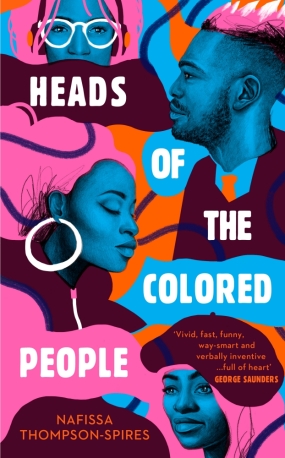 Nafissa Thompson-Spires’s debut short story collection, Heads of the Colored People, takes its title from the nineteenth-century black American writer James McCune Smith’s The Heads of the Colored People (1852-4),written under the pen name Communipaw, a series of ten biographical character sketches of black working class people living in New York. (You can read more about them here.) Thompson-Spires writes that ‘like the original sketches, these stories maintain an interest in black US citizenship, the black middle class, and the future of black American life during pivotal sociopolitical moments.’ Many of her stories fall into rough groups. The opening story, ‘Heads of the Colored People: Four Fancy Sketches, Two Chalk Outlines, And No Apology’ totally deconstructs one of the most familiar narratives we hear about black American lives: the innocent black man shot and killed by the police.

Thompson-Spires’s protagonist, Riley, is as deliberately unlike any familiar images of these victims as it’s possible to be, with ‘blue contact lenses’, bleached hair and a love of cosplay, dressed as manga character Tamaki Such ‘in a skinny periwinkle suit with a skinny black tie.‘ After his death, the picture released of Riley in the press shows him in ‘an oversize blue shirt and a bedazzled blue bandana over cornrows. His mother, and girlfriend, Paris, explained repeatedly that he was not dressed as a thug, but as nineties Justin Timberlake.’ But this title story isn’t just about confounding stereotypes; the omniscient narrator’s voice constantly intrudes, corrects and analyses. Thompson-Spires seems to be commenting on how difficult it is to tell a story like this without all the other versions of it getting superimposed over the top. It’s in this story that her voice sounds most like Paul Beatty’s brilliant, Booker-Prize winning The Sellout.

The first set of stories in this collection loosely follows Fatima, growing up in an all-white neighbourhood and at a series of virtually all-white schools. In ‘Belles Lettres’, Fatima’s mother Monica exchanges a series of increasingly angry notes with the mother of the only other black girl at her elementary school, Christinia; in ‘The Body’s Defenses Against Itself’, an adult Fatima can’t help comparing herself to the only other black woman in her yoga class, while thinking back to her feud with Christinia; finally, in ‘Fatima, the Biloquist: A Transformation Story’, the teenage Fatima befriends an albino black girl, Violet, who hails from a much more diverse public school and who teaches her how to talk and behave ‘like a black person’. Thompson-Spires reflects a more modern version of the experience of growing up elite and black that Margo Jefferson describes so well in Negroland; in another of the stories in this collection, her female black protagonist, contemplating suicide methods, also picks up on the idea that black women are rarely allowed to be at the tragic centre of stories about self-harm and suicide, because they aren’t seen as fragile and as worthy of care in the same way as white women are.

A second set of stories brings together some of my favourite pieces in this collection, when Thompson-Spires turns her satire up to ten. In ‘The Subject of Consumption’, a documentary-maker seeks dysfunctional families leading alternative lifestyles. In ‘Suicide, Watch’, the quasi-suicidal black woman mentioned above tries desperately to get as much attention as possible on Facebook while she hints she’s thinking of ending her life, only to kill herself accidentally by microwaving her phone: ‘in the moment, Jilly saw only the bright crimson of the explosion. It came in four red pops, like notifications, friend requests.’ In ‘Whisper to a Scream’, a teenage girl makes soothing ASMR YouTube videos even as she knows that men are privately getting off on them – as long as they can’t see her face. I usually steer clear of any satire about ‘social media’ because it tends to be incredibly lazy, relying on stereotypes about how uniquely self-obsessed we are today, but Thompson-Spires bypasses all of this in the sheer horror and colour of her writing. A fourth story, ‘This Todd’, while not about social media as such, continues the theme of obsession with appearances, as an artist, Kim, dates a succession of disabled black men, fixating upon their injuries.

Heads of the Coloured People is a fresh, irresistible and consistently intelligent take on (mostly middle-class, mostly young) black lives in America today. Thompson-Spires is a writer to watch.

I received a free copy of this collection from the publisher for review. It’s out in the UK on 9th August.