Malibu Rising follows the four Riva siblings through the course of a single day and night in August 1983 as they hold their annual party at their clifftop mansion. The novel centres on the oldest of the four, Nina Riva, who has always held the family together after their rock star father Mick left them when they were small children and their mother June descended into alcoholism. Even now her siblings are grown up, Nina continues to put others first, pursuing a modelling career that she doesn’t want for the sake of financial security as she grieves the end of her marriage. However, this year’s party will throw everything up in the air for the Rivas, with both unexpected guests and unexpected secrets emerging as the night goes on.

Malibu Rising shares a focus on historic glamour and fame with Taylor Jenkins Reid’s two previous novels, The Seven Husbands of Evelyn Hugo and Daisy Jones and the Six, but in terms of style, it’s closer to her earlier, fluffier books like Maybe In Another Life and Forever, Interrupted, which were much more standard chick lit. (You could make the case that Evelyn Hugo is pretty fluffy, but I think Reid actually adopts a stylised mode of storytelling for that book that gave it both its humour and its edge.) It starts promisingly but quickly fades out in its second half, with none of the Riva siblings fully realised as characters except Nina – and even then, Reid has an unfortunate tendency to spell out all of the revelations Nina has about her life and exactly how they connect back to her difficult childhood. Given the lack of page-space for the other three siblings, it’s even odder that Reid chooses to jump between the heads of multiple unrelated party-goers in the second half of the novel, even though we learn nothing about them except who they are in love or lust with at the time, and they have no effect on the story.

Reid still has the gift of making us care about her characters, and I was invested in Nina and her relationship with her parents – I thought the sub-plot with her father was actually resolved quite well, even if it was a bit heavy-handed, as Nina refuses to accept glib rationalisations for why he treated the family so badly. However, this was a real disappointment after the two previous novels, and felt like it had been written in a rush. Given how well Reid handled stories that are meant to be a composition of different accounts (Daisy Jones) or a single account from one potentially unreliable narrator (Evelyn Hugo), I wonder if this mode of storytelling simply suits her better than the more straightforward multi-perspective third-person she uses in this novel, which didn’t do her writing any favours. A fun beach book, but I expect more from Reid. 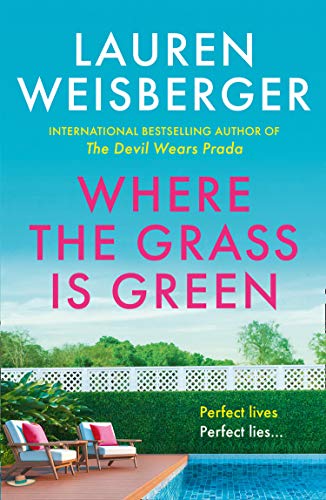 I’ve been reading Lauren Weisberger’s books since The Devil Wears Prada, even though they frequently make me quite cross, because she seems to be so against women pursuing their own ambitions – The Devil Wears Prada itself is the best example of this, but it’s also a pretty clear sub-theme in The Singles Game and Last Night in Chateau Marmont. In her previous novel, The Wives, she softened this message slightly to portray the importance of balancing family and career, and interestingly introduced a relatively older female character (by which I mean a character in her late thirties, nobody is ever actually old in this world) who regrets having completely sacrificed her own life for her children. This theme continues in her latest offering, Where The Grass Is Green*, which focuses on two sisters whose lives have taken unexpectedly different paths: Peyton, the high school dropout, is now an incredibly successful TV anchor, while Skye, the academic high-flier, is now totally focused on her daughter Aurora.

As I’ve said, Weisberger is often out to punish her protagonists when they start getting ideas, so I found this novel surprisingly sweet compared to most of her other work. It’s all set in the completely ridiculous world of the super-wealthy, so bears little resemblance to actual life, but the relationship between the two sisters is portrayed as supportive and loving. Neither is glorified at the expense of the other, although Weisberger does default a little back to her ‘family over career’ agenda by the end of the novel. I also found the portrayal of Peyton’s teenage daughter, Max, refreshingly positive compared to the usual ways that teenagers come across in light women’s fiction. The book is marketed as being about a college admissions scandal, but that’s more of a plot device than anything else (if you want a beach read about college admissions, go for Tracy Dobmeier and Wendy Katzman’s Girls With Bright Futures). Instead, the focus is the relationships between these three women, which makes this book much more fun and less depressing.

*Titled Where The Grass Is Green And The Girls Are Pretty for the US market, which is a Guns n’Roses lyric and a much better title. I’m not sure why the publishers truncated it for the UK – I wouldn’t have got the reference either way, but the UK title doesn’t make any sense. Maybe a copyright issue?

Yours Cheerfully, the sequel to AJ Pearce’s delightful Dear Mrs Bird, brings the reader more of the same jollity and ‘Blitz spirit’ – which is probably even more welcome now during the Covid-19 pandemic than it was when the first book was published. Emmy and her best friend Bunty are still bearing up as well as they can on the home front in London during the Second World War. Emmy is still working at Women’s Friend magazine, trying to shore up readers’ morale and offer them good advice, but after being invited to a Ministry of Information briefing for writers on women’s magazines, she is gripped by the idea of trying to encourage more women to sign up for war work. However, as she starts to meet women who are actually working in factories, she realises that a shortage of government nurseries is both preventing them Doing Their Bit and putting many into financial hardship. Can Emmy balance her ‘patriotic’ duty to give a positive account of factory work with her new awareness of the real needs of workers?

As she did in Dear Mrs Bird, Pearce deliberately adopts a kind of spoof pastiche of how we think people sounded in the 1940s, without any attempt at historical realism. This worked a little less well for me in this sequel, however, perhaps because of the integration of more serious questions about women’s war work and childcare. It also felt more twee than its predecessor – while Dear Mrs Bird was centred on some genuinely tragic events, nothing nearly as dark happens in Yours Cheerfully, so the balance doesn’t feel quite right. Emmy’s life is indeed so cheery that I found myself becoming more interested in Bunty’s quiet struggles instead. All in all, this is a fun read, but it feels very much like the middle book in a trilogy – and I suspect a third will be along soon.

I received a free proof copy of this novel from the publisher for review. It’s out in the UK on June 24th.