This is a guest post by Dr Sebastian Nye, lecturer in philosophy at Oxford, inspired by my previous post on The Demon Headmaster. 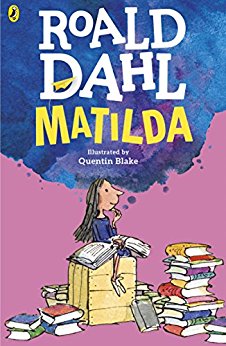 My childhood copy of Matilda on the left; the newest version on the right.

Fat boys do not, as a rule, come across well in Roald Dahl stories. Usually they are all-consumed with gluttony, unable to attend to anything beyond the next mouthful. Bruno Jenkins, in The Witches, is depicted as so obsessed with eating that he not only misses the danger posed by the witches, but also the fact that he has been turned into a mouse. However, there is one glorious exception: Bruce Bogtrotter from Matilda. Bruce is a pupil at Crunchem Hall, presided over by the discipline-obsessed and sadistic Miss Trunchbull. The school is introduced as a place where punishment is swift and dissent is almost impossible. While the regime is finally overthrown by Matilda, Bruce is at the centre of the first act of successful resistance. In keeping with the fat kids in Dahl’s other works, Bruce lets gluttony get the better of him and steals a slice of Miss Trunchbull’s private chocolate cake. He is caught and the headmistress subjects him to the most humiliating punishment she can think of.

Bruce is given the seemingly impossible task of eating the rest of the giant cake in front of the whole school. Trunchbull no doubt expects him to be violently sick or, at the very least, become an object of universal disgust, leading to merciless bullying from the other kids for years to come. However, she miscalculates: the kids hate her more than they are disgusted by him. Far from taunting Bruce, they cheer him on and, when he finishes the cake, is applauded as a hero. Trunchbull is so furious that she smashes the cake platter over his head. Happily, Bruce is too full of cake for it to harm him. This is a turning point in the book. While it does not overthrow Trunchbull a crucial step is taken towards that end: successful resistance is shown to be possible. The children in Tim Minchin’s musical adaptation express the significance of this by singing: ‘We never thought it was possible/but here it is coming true/we can have our cake and eat it too’.

Organised acts of resistance by children against school authorities certainly occur. One wonderful example took place in 1972, when ten thousand British school children walked out of school to protest the use of corporal punishment. Despite this, the depiction of such organised resistance in children’s fiction is relatively unusual. However, Matilda, and the episode with Bruce Bogtrotter in particular, is not only significant because it depicts resistance by children against their school. It is significant because of what it tells us about protest and resistance more generally. When people think of protest and resistance, at least in liberal democracies, they often have in mind specific kinds of activities such going on a demonstration with a banner, signing a petition, writing a blog, and so on. Going on strike is about as radical as it gets. These activities are, for the most part, safe, familiar, predictable and easily identifiable. That is not necessarily a bad thing. However, it does lead to a view of protest and resistance which is, I think, unfortunately narrow. There are three important points to draw out about the episode with Bruce each of which, in different ways, puts pressure this arguably narrow conception of resistance.

The first is that what constitutes an act of process depends, very largely, on context. If eating a chocolate cake can, in the right circumstances, be an act of resistance, then anything can. (As a chubby kid myself, this was certainly the kind of protest I can get behind.) Gandhi made some salt, Rosa Parks sat on a seat, and Bruce ate a cake. Acts of resistance and protest should not be understood as a handful of discrete activities. Second, even acts which are prima facie objectionable can be valid and important acts of protest. I, myself, do not think that there is anything disgusting in being an overweight kid who eats chocolate cake. As I mentioned, I was that kid. However, Dahl clearly did, and that is the prescribed response from the text. Accepting that Bruce is a disgusting glutton does not, however, do anything to lessen his act of protest. Just as Diogenes the Cynic illustrates that defecation and masturbation can be valid forms of protest despite being disgusting (indeed, because they are disgusting), so Bruce demonstrates that vice and valuable resistance are not mutually exclusive. ‘Dignified protest’ is usually used as a term of praise, but perhaps there is something to be said for undignified protest.

Third, even obedience to authority can constitutes resistance against it. Bruce, after all, did exactly what he was told to do. In a sense, all that happened was that he was told to eat a chocolate cake and he ate a chocolate cake. By doing exactly what he was told to do, he highlighted Trunchbull’s weaknesses; in particular, that she understood neither his eating capacities nor, more importantly, the school’s social dynamic and her own unpopularity relative to his. Defiant obedience can show up authority, and exploitation of this can be powerful. A perhaps stretched comparison can be made with Socrates. At his trial, as reported in the Apology, Socrates did what he was officially supposed to do: defend himself, honestly and truthfully, against the charges made against him. However, he deliberately and explicitly failed to do what he was unofficially supposed to do: weep, wail, present his children and wife in floods of tears, and beg for the mercy and kindness of the Athenians.

As a result, Socrates highlighted the hypocrisy of the Athenians and the judicial process, which purportedly aimed at establishing the truth, and as a result received the death sentence. Again, we are told in Crito that Socrates was widely expected to flee the city before his execution. (Indeed, it seems that the Athenians wanted him gone but did not want to get blood on their hands, so Socrates fleeing was the generally preferred outcome.) However, once again, Socrates did what he was officially supposed to do – stay and be executed – rather than what the Athenians expected and wanted him to do. This is another act of defiant resistance against Athens, which made Socrates a martyr. Although, as an act of defiant resistance, consuming chocolate cake is preferable to hemlock.