This year, despite not being religious myself, I’ve become slightly obsessed with fictional nuns. I thought I’d think a little about why nuns offer such interesting possibilities for novelists, in anticipation of Lauren Groff’s forthcoming Matrix. Here, I’ll be discussing three very different books about three very different kinds of nuns: Sarah Dunant’s Sacred Hearts (2008), which depicts a convent in sixteenth-century Italy; Lina Rather’s Sisters of the Vast Black (2019), which follows an unspecified order of nuns on board a living spaceship; and Rumer Godden’s In This House Of Brede (1969), which is set in an English Benedictine community in the 1960s. However, although these nuns are far apart in space and time, they all sit within the Catholic tradition; this post will therefore focus on Catholic nuns, while recognising that these aren’t the only nuns that exist, even in the Christian faith – and recommendations for books that deal with non-Christian nuns would be very welcome! 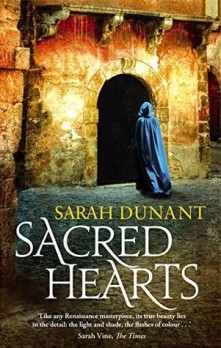 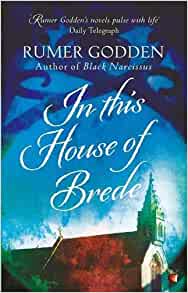 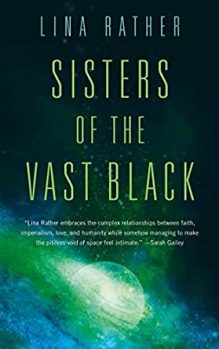 Catholic nuns tend to be the butt of jokes, either portrayed as incredibly prudish or sex-obsessed; because nuns are supposed to be angelic, any hint of misbehaviour from a nun is somehow funnier than if it came from a ‘normal’ person. (One of my favourite jokes as a child – no idea why – was ‘What goes black white black white?’/’A nun rolling down a hill.’/’What’s black and white and goes ha ha?’/’The nun who pushed her!’) The radical potential in stories about Catholic nuns, therefore, lies in asking what it’s really like to be a nun and whether this popular stereotype of repressed, unhappy, usually elderly women holds true. If you take out references to nuns or convents from the blurbs of Sacred Hearts and In This House of Brede, they suddenly sound a lot more subversive:

Sixteen-year-old Serafina is ripped by her family from an illicit love affair and forced into the women’s community of Santa Caterina, renowned for its superb music.

Philippa Talbot, a highly successful professional woman, leaves her life among the London elite to join a women’s community.

This is not to say that you can simply ‘take out’ the religion from these kinds of communities and reimagine them as proto-feminist communes, but that there’s obvious potential in telling stories about groups of women who live together and rely on each other, and are often able to do things they could not do in the outside world, while recognising that this kind of life comes with its own set of restrictions. To be honest, I wouldn’t be surprised if Matrix sparks a new trend for this kind of novel, as it speaks to a lot of twenty-first century concerns: women who are not defined as wives or mothers; female separatism; loneliness vs chosen solitude; the un/importance of sex.

However, if nun novels were just about women both embracing and escaping the confines of their times, Sisters of the Vast Black would be pointless. Why write about nuns in space when you can invent a future where women can do anything they want? Here, I think we see the appeal of writing about a community of people who are simply trying to do the right thing, aside from feminist concerns. The first two-thirds of Sisters of the Vast Black have a moral seriousness that isn’t preachy or theoretical but very much connected to the world the sisters are dealing with. Even more interestingly, both Sacred Hearts and In This House of Brede depict closed orders, where the nuns’ job is not to do ‘good works’ but to create a community of prayer, cut off from most contact with the world around them. The purpose of this can be hard to understand; what good are the nuns doing by removing themselves from the world? However, in both novels, the power of the convent, of this way of living, is evident, although both Godden and Dunant recognise that this life is right for some women and hellish for others. 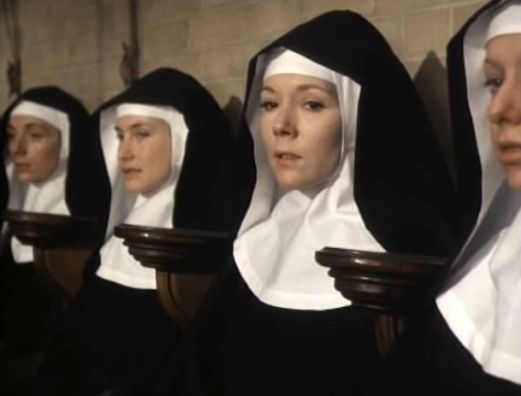 Why read about Catholic nuns if you are not yourself Catholic or Christian? One great thing that these novels open up is the opportunity to write about women who are not primarily driven by one emotional tie, whether that’s to a man, a child or another family member. As I wrote in my review of Lissa Evans’s Old Baggage, these kind of novels are very rare. And while I wouldn’t want to read a nun novel that was simplistic or dogmatic about religion, none of these books are like that. Dunant vividly conveys the importance of faith to some women in her sixteenth-century convent while others suffer under its strictures. Godden has a harder task, convincing us that a twentieth-century character like Philippa would enter a convent in the first place, or thrive there as she does. But while few of us have a vocation to be a nun, I could identify with how Philippa struggles with herself, the fight to be the best version of herself she can be – I don’t need to share her beliefs to understand that.

Finally, there’s a thoughtfulness about these kind of novels, a deliberately reflective pace that I find hugely refreshing in fiction. Sacred Hearts and In This House of Brede tell a big story about lots of women and the lives they lead, and they aren’t tempted to hurry us along to hit the dramatic highpoints. Sisters of the Vast Black, in my opinion, suffers in its final third because it suddenly speeds up, losing much of what made it special earlier on. These books eschew standard plots with a single, ‘active’ protagonist to think about how even the most self-reliant of nuns are part of something bigger. Along the way, they break many ‘rules’ of fiction, and they’re all the better for it.