I accidentally signed up for (and immediately cancelled) Amazon Prime for the dozenth time recently, but still have a free trial lasting a month. As part of this, I realised, I can borrow Amazon Original e-book only short stories from Prime for free, many of which are by authors I really rate. It turns out, this is quite addictive, and I’ve recently read two short story collections. Here’s what I thought: 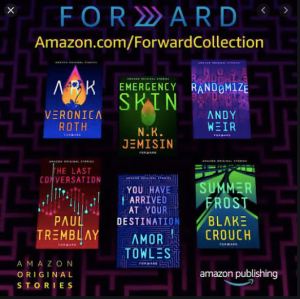 The Forward collection, edited by Blake Crouch, is a selection of six SF short stories about the future of our world. Overall, I found this collection disappointing: the stories tended to be cliched, and were often more engaged with spelling out their moral message than in creating compelling fiction. This was especially true for ‘Ark’ by Veronica Roth and ‘Emergency Skin’ by NK Jemisin (a huge disappointment from Jemisin, who’s usually a much more subtle writer). I’m honestly getting a bit concerned about this trend in a lot of the recent short SF I’ve read, because while I love stories that tackle the real-life inequalities in our world, and totally agree with the messages these writers are trying to put across, I find these kind of stories so alienating. I just don’t think fiction is the right medium to choose if all you want to do is present your own points, however morally important those points might be. In contrast, ‘Randomise’ by Andy Weir was fun but forgettable, and Paul Tremblay’s ‘The Last Conversation’ sub-Black Mirror and predictable.

The two stand-outs for me were the two longer stories: Blake Crouch’s ‘Summer Frost’ and Amor Towles’s ‘You Have Arrived At Your Destination’. Like the two Crouch novels I’ve read, Dark Matter and Recursion, ‘Summer Frost’ suffers a bit from trying to chuck too many ideas into one story, but it makes you think and keeps you guessing, and that’s always a good thing. It tackles the familiar trope of a video game designer who creates an AI that is gradually increasing in intelligence, but adds in creepy stuff like Roko’s Basilisk, which I loved. My major criticism would be that the narrator is a queer woman, but her voice feels odd to me, and I kept on forgetting that she wasn’t a straight man, although I can’t put my finger on why – possibly something about the particular quality of the sexually possessive way she interacts with her creation? ‘You Have Arrived At Your Destination’, meanwhile, is probably the most well-crafted of the stories in this collection, which makes sense given that Towles made his name in literary fiction. It cleverly starts with another hackneyed premise – a man is invited to choose the genetic characteristics of his future child – but then shoots off in a different direction, exploring the ways in which we already try to control our children’s lives, and how frequently we fail. Towles is willing to let his story finish ambiguously, which gives it much more resonance than the neat endings of most of the stories in this collection.

The Out of Line collection features seven stories by female writers that explore ‘what happens when women step out of line and take control of their own stories’. This was a much stronger collection than Forward, and I wasn’t surprised, because I know how good most of these writers are. I loved Lisa Ko’s ‘The Contractors’, about  two women working for the same company, one in the Philippines and one in the US, who gradually wake up to their exploitation but also how it differs, and Mary Gaitskill’s ‘Bear Witness’, a dark multi-perspective story that focuses on a rape trial. Surprisingly, however, the real standout was Caroline Kepnes’s ‘Sweet Virginia’, a brilliantly satirical story that takes a young mother dreaming of Hallmark movies into her own version of a wintry escape. This has made me believe that there’s more to Kepnes than just one hit (I very much enjoyed You but couldn’t get through its sequel, Hidden Bodies, which I felt was re-running the same story again).

Two of the stories use a similar premise to Sophie Mackintosh’s novel Blue Ticket, imagining worlds where only certain women are allowed or encouraged to have children. Roxane Gay’s ‘Graceful Burdens’ started with an arresting scene at a ‘baby library’, where women are encouraged to check out babies for a short time to ease their maternal urges, but didn’t do anything very interesting with the idea after that. Meantime, Emma Donoghue’s ‘Halfway To Free’ really worried me; I love Donoghue, but this story was so problematic. By imagining a dystopian world where childlessness is celebrated as a means of population control and environmentalism, I felt that Donoghue played strongly into anti-feminist tropes, and also weirdly scapegoated millennials and Generation Z who are (rightly, in my opinion) thinking hard about whether or not to have children due to the climate crisis. I have to believe that this was a writing misstep rather than a reflection of what Donoghue really thinks; there are suggestions in the story that this world is not meant to be entirely bad (older people are respected and valued much more, and a dementia vaccine shows how healthcare has been refocused on their needs) but it very much comes across as a warning rather than a nuanced look at what would happen if we elevated childlessness rather than motherhood.

A final note on this collection: all the protagonists in these stories are mothers, and all but two of them are overtly about motherhood. There’s nothing wrong with this, but the collection wasn’t framed as an examination of motherhood – and certainly I know some of us are weary of this theme after a glut of novels in 2019 and 2020. I personally found Kepnes’s take on this, in particular, very refreshing, but it feels like this focus should have been advertised upfront.

I’ll now be taking a break from this blog until I post my Commendations and Disappointments, Top Ten Books of the Year, and 2021 Reading Plans on December 30th, December 31st and January 1st respectively! I hope you are all able to have a relaxing holiday season, however you celebrate.