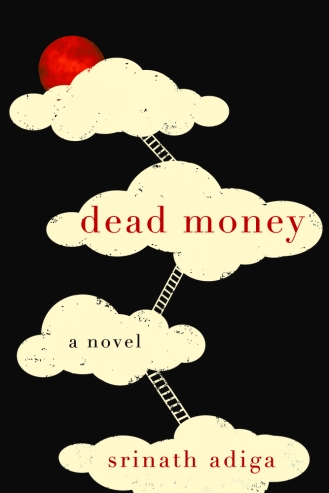 Srinath Adiga’s debut novel, Dead Money, kicks off in February 2002 with what amounts to a captivating novella. Raymond Li, a Hong Kong stockbroker, has been making money for gangsters by investing it judiciously. When he loses millions of dollars for his key client, Mr Wu, he knows his life is worth nothing if Wu finds out – but how can he make so much money so quickly with no ready capital? Raymond thinks of a crazy idea: Afterlife Dollars, inspired by the Chinese tradition of burning paper money and objects for use by the dead. If he can persuade people that he can exchange money for Afterlife Dollars with the Afterlife Bank, he can essentially make something for nothing, while selling the idea of an affluent afterlife where you will have everything you want because you had the forethought to prepare in advance. This section of Dead Money reads like a speculative thriller, and is totally gripping as Raymond sets his scam in motion but is always looking over his shoulder to see if either his gangster clients, or the police, will catch up with him. Adiga’s writing is, to be honest, a bit clunky and schlocky, but this doesn’t matter so much at the start because his ideas are so interesting.

Unfortunately, while the rest of the novel isn’t a complete write-off, it certainly steers off the rails with an unnecessarily sensationalist and stereotypical second section about Muslim suicide bombers, before getting back on track for a while in 2011 with its third narrator, Theo, a Dutch investment banker who is being forced to recommend Afterlife Dollars as investment stock to his clients despite the fact that he thinks they’re immoral. Adiga pulls off some clever twists here as he explores the ways that the mythology of Afterlife Dollars has been developed in different cultural contexts, and thinks about how this new currency might impact the global economy. However, the novel slides to an uneven halt as it moves more towards dystopian fiction than satirical thriller, a genre switch that immediately exposes the limitations of Adiga’s writing. I loved the sporadic originality and intelligence of Dead Money, but writing- and character-wise, it’s a bit of a mess.

I received a free proof copy of this novel from the publisher for review. It’s out on January 26th.

Aravind Adiga’s fourth novel, Amnesty, was one of the books I was most looking forward to in 2020. I’ve had a patchy experience with Adiga in the past; I loved his debut, The White Tiger, but found Last Man In Tower ponderous and schematic. I was drawn to Amnesty by its premise: it focuses on Danny, an undocumented Sri Lankan immigrant to Australia, who has to decide whether to report crucial information about a murdered acquaintance to the police and risk getting deported. The blurb seemed to share some striking similarities with Nikita Lalwani’s thought-provoking You People, which also (partly) focuses on an undocumented Sri Lankan immigrant who has to make a difficult ethical decision, although it’s set in London rather than Sydney. The two novels do, obviously, share concerns about the dehumanising effects of immigrant policy, but after that they part ways. While Lalwani is interested in the solidarity that grows between a disparate group of undocumented immigrants in a London cafe, Adiga’s protagonist perceives greater hostility from ‘brown’ than white Australians: ‘The brown man in a white man’s city who is watching other brown men. Danny had studied all the ways this was done, from the amiable glances of the Western Suburbs Indians, smug in their jobs and Toyota Camrys… [to] the ostentatiously indifferent I’ve got nothing in common with you, mate glances of the Australian-born children of doctors in Mosman or Castle Hill (Icebox Indians, Danny called them, because they… never seemed to sweat, even in summer’).

Overall, I felt that Amnesty was weaker than You People, largely because of Adiga’s prose, which is surprising, given that I’ve always found him to be a very readable writer in the past. For some reason, when writing from Danny’s third-person viewpoint, he consistently trips himself up with clauses and sub-clauses: ‘In the moist mirror… he now saw the city of Sydney, when it appeared most beautiful to him, at dawn on a winter’s morning in the heart of the city, with the road-cleaning machines rumbling about Danny as he looked up at the four-faced sandstone clock tower of Central Station held aloft on shattered and roseate clouds: renewing the promise to the immigrant that something as thrilling as the air-conditioned interior of the Hotel Galadari lay ahead of him.’ This is a particular problem because Amnesty is definitely an observational rather than a plot-driven novel; Danny’s central internal dilemma is always present, but there is very little external action. Adiga still retains his sharp eye for detail, but his writing is just so hard to follow that I felt alienated from everything that was happening.