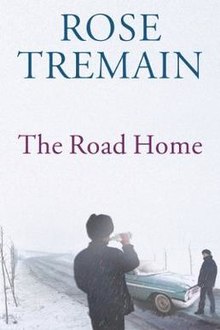 Rose Tremain’s The Road Home won the Orange Prize for Fiction in 2008. It follows Lev, an immigrant from a nameless Eastern European country, as he struggles to make a life for himself in England while sending money home to his mother and his young daughter. For much of the novel, Lev is positioned as a neutral social observer, and Tremain often seems to be using him (as well as some of the other characters that he meets) as a mouthpiece for the things she wants to say about the weirdnesses and excesses of English society. For example, when Lev goes to see an experimental new play that features a character who watches child pornography, he thinks it’s ‘disgusting’ and gets into an argument with his girlfriend, Sophie, about it:

“It’s shit,” said Lev… “I understand you now. You don’t see anything! You see what is “fashion”, what is “smart”. That’s all that matters to you. Because you don’t know the world… I’m not sick, like this play. At home I have a daughter, Maya. I love this daughter – “

“Who cares?” said Preece [an artist.] “That’s so not relevant. Who cares if you’ve got a daughter? This is art. This is cutting edge.”

Because of this, Lev doesn’t develop a distinctive voice or character of his own. For much of the novel, he remains a cipher, flipping between different registers depending on what Tremain wants from the interaction; which makes the one scene where he smashes out of his anodyne default even more shocking. As this argument about art heats up, he suddenly, for no obvious reason ‘grabbed Sophie and locked her body to his with his arm around her neck… She began to choke and gasp.’  Later on, when she comes round to see if he’s OK after he’s fired from his job, he rapes her. Nevertheless, the reader seems to be expected to continue keeping company with Lev as if all of this is forgivable and understandable; it’s not presented as a line that he’s crossed.

While this is horrific enough by itself, the problems with this novel run even deeper. As I’ve suggested, Tremain uses Lev to criticise certain aspects of English society, but this never amounts to a fundamental engagement with the problems of capitalism and globalisation. In other exchange where she seems to be making her characters spell out one of the messages she wants to impart, Lev is talking to Midge, the owner of an asparagus farm that employs migrant labour. Lev thinks that Midge’s Chinese employees are so happy all the time because “in England, they feel more… free than in China. And this freedom gives them happiness.” (The Chinese stereotypes in this novel are something else.) Midge replies: “Never think of our lives as “free”, do we? Think of them as one long work shift… But perhaps, in this country, we take a lot for granted.” Later, Lev is talking to a friend who works as a mortgage advisor: she comments ‘We have a mountain of personal debt in this country… in Britain, everybody wants it now, hurry-scurry: new house, new car, new fridge, new kitchen…’. This novel was published just before the financial crisis, but this message is still pretty awful: England is the promised land, and individuals’ problems are their own greedy fault. It’s notable that Lev encounters barely a jot of xenophobia throughout the whole novel, despite anti-immigrant sentiment being rife at the time; prime minister Gordon Brown made his infamous ‘British jobs for British workers’ statement the year this novel was published.

So if England is mostly all right, actually, what about the nameless country Lev has left behind, and which he still thinks of as ‘home’? The trouble is that we don’t know anything about it. Not only is it never identified, everything we do learn is generic; it’s poor, people struggle to get work, vodka is the most popular drink, Lev’s mother sews traditional things, Lev’s best friend runs a dodgy taxi business with a patched-together car. By refusing to make this country real, Tremain plays into stereotypes of a faceless, grim Eastern Europe defined solely by its Communist past, and contrasts this no-place with the opportunities offered by a England – mostly by a London – that is rendered in specific detail. As Eveline Kilian argues in her analysis of the novel, ‘There is nothing in Lev’s country that seems worth preserving: no traditions, no culture, no political ideas; it is a place with “[n]o future”‘. [1] It’s only by adopting British values that Lev can build a successful life for himself back home, opening a restaurant that he’s sure will make money because it will be ‘the first one in my country where the food will be truly good’. I can’t imagine that The Road Home felt especially timely or insightful even in 2008, and I fervently hope that it wouldn’t win the Women’s Prize if it were published today.

[1] Eveline Kilian, ‘Frames of recognition under global capitalism: Eastern European migrants in British fiction’ in Narrating Poverty and Precarity in Britain ed. Barbara Korte and Frédéric Regard (DeGruyter, 2014), p.138. [Paywalled, but you can read an extract here.]