Tiamat’s Wrath is the eighth book in the Expanse series, a vast interplanetary science fiction saga with more than a little in common with George R.R. Martin’s A Song of Ice and Fire (the two writers behind the pen name ‘James S.A. Corey’ dreamed up the world of the Expanse in a role-playing game where Martin was one of the players). Given that this is the eighth of nine planned installments, the rest of this review will inevitably contain spoilers for the first seven books of the series [highlight to read]. Tiamat’s Wrath and its immediate predecessor, Persepolis Rising, instigate a soft reboot of this very long series by skipping forward decades and refocusing on what was the central antagonist of the first few books: the protomolecule, a substance created by a long-lost alien race that has the power to rewrite the very laws of physics. This was a massive return to form, in my opinion: neither Nemesis Games or Babylon’s Ashes, the fifth and sixth entries, worked well for me because they deviated from this fascinating concept to focus on a much more mundane war. I was thrilled when I realised that Persepolis Rising was returning to the series’ original horror roots, and Tiamat’s Wrath continues in the same vein, focusing on the dangerous meddling of the new Laconian Empire. Corey also resists the temptation to expand the number of narrators as they did in some of the earlier books, making them unwieldy and confusing: sticking to a core group, all but one of which have narrated before, allows Tiamat’s Wrath to keep up its pace and tension. The ending is hugely disturbing, and having become lukewarm about the Expanse in its mid-series slump, I now can’t wait for the ninth and final book. 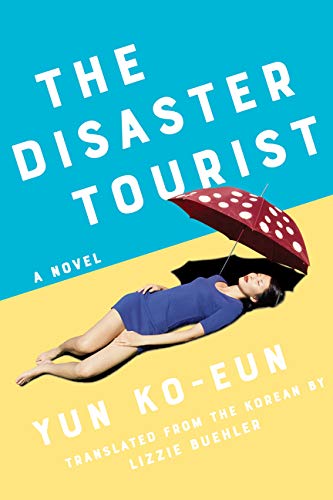 Yun Ko-eun’s The Disaster Tourist, translated from the Korean by Lizzie Buehler, follows a young woman called Yona who feels she is being gradually forced out of the company she works for, Jungle Tourism, after experiencing sexual harassment. Jungle specialise in ‘disaster tourism’, luring Korean tourists to the sites of high-profile disasters, and Yona is dispatched to assess an experience called ‘Desert Sinkhole’ in the fictional country of Mui, which Yun reportedly based on south-east Asian countries such as Vietnam and Thailand. Yona discovers that this once-popular destination is becoming less appealing because it’s perceived by its visitors as lacking authenticity; the volcano doesn’t look like what they think a volcano should look like, and the sinkhole isn’t providing the emotional experience they crave. After being accidentally left behind in Mui when her tour group depart, Yona becomes drawn into an attempt to fundamentally rebrand this tourist destination through manufacturing a new disaster, directed by a faceless corporation called Paul. It goes without saying that this novella is intended to critique the destructive tourism of wealthy outsiders, but it didn’t hit as hard as I thought it might. I wasn’t convinced by the inclusion of workplace harassment at the beginning; it seemed like one theme too many for such a short book to carry and didn’t fundamentally shape Yona’s portrayal, so I would have preferred the focus to remain with the exploitation of Mui. Even so, the intensely surreal tone meant that I felt too distanced from what was happening; it seemed so unreal that it was hard to connect with the moral questions the book raises. I wondered if, as an English reader who hasn’t read that much Korean fiction, I was missing something, and sought out this fascinating interview with the author and translator; however, Yun’s suggestion that she wanted this novel to feel like an ‘Orwellian dystopia’ confirmed that for whatever reason, The Disaster Tourist didn’t work for me.

Suzanne Adam’s reflections on being an American expat who has lived in Chile for forty years, Notes From The Bottom of the World, were billed as being travel writing about ‘[Chile’s] culture, its idiosyncrasies, and its exotic landscapes, from Patagonian glaciers to the northern Atacama Desert’. However, this series of very short essays – many aren’t much more than a page long – focus more on Adam’s personal experiences than her explorations of Chile, at least in the third of the book that I read. Moreover, her observations tend towards the banal and the cliched, whether she’s writing about ageing or glaciers; for example, travelling through the Patagonian fjords, she muses: ‘What draws us in the twenty-first century to visit rugged, distant places? Is it an urge for adventure in these times when few unexplored frontiers remain on this planet?’ Given that this is really life-writing rather than travel writing, I found Adam strikingly unreflective. If you want a book that combines travel-writing from the farthest south with intelligent self-narrative, I’d suggest reading Jean McNeil’s wonderful memoir Ice Diaries instead.