Thanks to Annabel for this graphic!

I’m delighted to be taking part in both the blog tour and the judging panel for Not the Wellcome Prize this year, which has been so brilliantly organised by Rebecca Foster of Bookish Beck. As the Wellcome Book Prize, which aims to recognise books that have a  ‘central theme that engages with some aspect of medicine, health or illness’, is on hiatus this year, we are hoping to fill the gap by highlighting some of the best health-related fiction and non-fiction of 2019, then choosing our own ‘winner’ in May! Be sure to check in with the other stops on the blog tour to see what other books we’ve picked.

I’m excited to showcase two titles on my blog today: Ted Chiang’s latest collection of SF short stories, Exhalation, and Bev Thomas’s debut psychological thriller, A Good Enough Mother. These two books are very different from each other, but share common concerns about parenting, childhood and a ‘healthy’ upbringing. 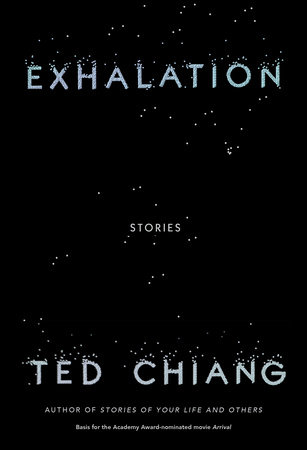 I was utterly gripped by Exhalation when it first appeared in July 2019 (as was Barack Obama, who said that it ‘will make you think, grapple with big questions, and feel more human. The best kind of science fiction’.) It was one of my top ten books of 2019 and contains one of my favourite short stories of all time. You can read my full review of Exhalation here, but for the purposes of this blog post, I thought I’d focus on one novella in this collection that seems to me to be especially concerned with themes of medicine, health and illness.

‘The Lifecycle of Software Objects’ imagines a world where ‘digients’, virtual, teachable pets who seem to operate on the level of a chimp with language skills, have been created, and examines the ethical issues that this introduces. Humans swiftly get bored with their digients and move onto the next thing, except for a group of hardcore owners, our narrator, Ana, among them, who’ve formed real emotional bonds with their virtual creatures and are trying to find a way for them to live better lives. Because of this, this novella asks questions about what is healthy for both the digients and their owners; is it fair to keep the digients ‘alive’ when they have minimal social interaction and are often unhappy, but on the other hand, how can it be right to ‘kill’ a sentient being simply because you’ve got bored with it? A lot of owners start to ‘suspend’ their digients as a compromise solution, but this unsurprisingly unsettles the digients when they find out they’ve missed whole chunks of time.

The story continually plays with the analogy between digients and human children, up to the point when their owners have to decide whether to let their ‘teenage’ digients be recoded as sexual beings, and which, early on, is made explicit when one of Ana’s friends gets pregnant and tells her ‘People always say that we’re evolved to want babies, and I used to think that was a bunch of crap, but not anymore… Cats, dogs, digients, they’re all just substitutes for what we’re supposed to be caring for.’ Indeed, one of Chiang’s points in this novella is that ‘healthy’ AIs will need to be brought up like human children: ‘The years [Ana] spent raising Jax… gave him… fluency at navigating the real world, creativity at solving new problems, judgement you could entrust with an important decision. Every quality that made a person more valuable than a database was a product of experience.’ Chiang writes in his ‘Story Notes’ that ‘based on our experience with human minds, it takes at least twenty years of steady effort to produce a useful person.’ I’d challenge the idea that children and adolescents can’t be creative, resourceful or trustworthy, but the overall point is one worth making.

Nevertheless, I felt there was a darker message about the biological need for creating children that Ana’s friend talks about early in the story buried in ‘The Lifecycle of Software Objects’. One of the major obstacles for the digients and their owners in this novella is the obsolescence of the digital platform on which the digients were living their social lives, and the need for new coding to allow them to continue to interact with digients who run on other servers. While Chiang is delightfully good at teasing out the specifics of this situation, it also has symbolic weight; is it right to create new people who will be born into a world that is becoming unfit for purpose? As ever, Chiang doesn’t offer answers, but he poses some major questions.

Other stories in this collection that, in my opinion, have something to say about health, medicine and illness are ‘Exhalation’, ‘Dacey’s Patent Automatic Nanny’ and ‘The Truth of Fact, The Truth of Feeling’. 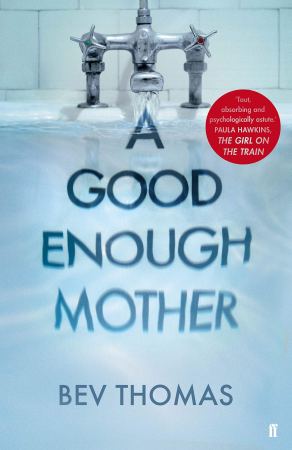 Way back in October 2018, I was lucky enough to hear Bev Thomas discuss this novel, which was published in March 2019, at the Durham Book Festival. Thomas previously worked as a clinical psychologist, and her expertise is evident in the very title of this novel, which is drawn from the work of the post-war child psychoanalyst Donald Winnicott, who published a number of popular childrearing guides as well as becoming a regular feature on BBC radio. Winnicott asserted that mothers should not worry too much about making ‘mistakes’ with their children, saying that ‘The good-enough mother… starts off with an almost complete adaptation to her infant’s needs, and as time proceeds she adapts less and less completely, gradually, according to the infant’s growing ability to deal with her failure.’ In his popular texts, he built on this by writing that mothers would instinctively know what their infants needed, and did not need to rely on external expertise. As I’ve argued, this may have been intended to reassure mothers (coincidentally, Winnicott was reacting against the strict inter-war ‘behaviourist’ ideas that Chiang satirises in Exhalation, in his story ‘Dacey’s Patent Automatic Nanny’!)  but, in practice, left many feeling inadequate because their parental instincts did not seem to have kicked in and they would have liked some outside help.

So, what does this mean for Thomas’s novel (other than setting it up with a title that feels pretty sinister to me!)? The book focuses on Ruth Hartland, a professional psychotherapist who is haunted by her missing son, Tom, who disappeared a year and a half ago. As she starts treating a new patient, Dan, she can’t shake the fact that he reminds her strongly of Tom, and her increasing inability to separate the two men leads her into tragedy. A Good Enough Mother functions perfectly as a gripping psychological thriller, but is much more thought-provoking than the average thriller about therapy (or indeed than the approximately two million other thrillers that deal with missing children). We see that Ruth has never felt she was a ‘good enough mother’ to Tom, despite the supposedly soothing nature of Winnicott’s advice; Tom always struggled to separate from her and she worries that she did not encourage him to become independent. Now that they are completely apart, she can only guess how he’s navigating the world by himself. This theme is especially highlighted by the fact that Tom is a twin, which – although he and his more confident sister are obviously fraternal rather than identical – makes Ruth strain even harder to understand why her two children are so different. Ruth’s gradual emotional breakdown felt utterly convincing, and this is a hugely promising debut. (Incidentally, it also gets the thumbs up from my mum!)

Make sure to check out the other great books featured on our blog tour! 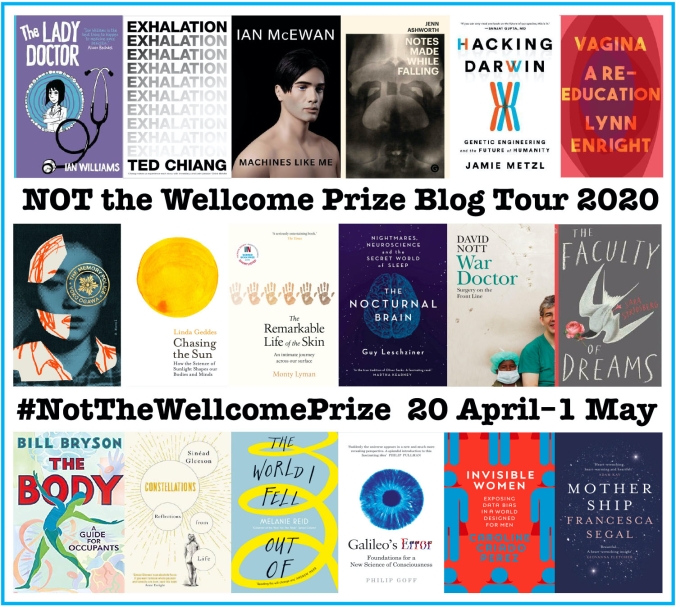 Have you read anything recently that deals particularly well with themes of health, medicine and/or illness?

19 thoughts on “Not The Wellcome Prize 2020: Exhalation and A Good Enough Mother”