Apart from my Women’s Prize longlist reading, which is swallowing up most of my time, I managed to pick three very different gripping reads that have helped me get through my first two weeks on lockdown.

Kiley Reid’s debut, Such A Fun Age, was both totally addictive and consistently entertaining – exactly what I needed last week – even if by the end I felt like it was shallower than it had seemed at the start. The book has a killer inciting incident. Emira, a twenty-five year old black woman, regularly babysits for two-year-old Briar, the child of a wealthy white woman, Alix, an influencer and blogger who lives in Philadelphia. When Emira is called out late one night to take Briar to the grocery store while Alix and her husband sort out some trouble at home, she is confronted by a security guard, who believes she must have kidnapped Briar. Horrified by this incident, Alix resolves to take Emira under her wing, and becomes increasingly fascinated by the nuts and bolts of Emira’s life. But when the two women discover that they have an unexpected connection, their usual defences begin to unravel. While the pace of this novel never falters, its writing is uneven; it feels unusual and original when Reid imagines the three-way relationship between Emira, Alix and Briar, fun but trashy when she skewers Alix’s corporate world, and awkward when Emira is hanging out with her group of black and Hispanic friends, who feel uncomfortably stereotypical.

This Goodreads review summed up my uneasiness by saying that ‘I most definitely felt like I was reading a book written about black struggles by a white woman’ even though Reid is black, and while, as a white woman, I wouldn’t have vocalised my discomfort in that way, I think there’s something in that criticism. Such A Fun Age is sometimes too concerned with didactically explaining microaggressions, rather than trusting the reader to understand. I also wondered if my problems with the depiction of Emira’s friends were due to age as well as race; Reid was about ten years older than these characters at the time this novel is set, and the evocation of what sociologists might call their ‘peer culture’ feels a bit try-hard. There’s also an unnecessary twist at the end concerning Alix that robs the novel of some of its complexity. Having said that, though, the good bits of this are really good, and it’s STILL better than much of the Women’s Prize longlist, so I fully stand by putting it on my wishlist.

My friend Eleni Kyriacou has just published her debut novel, She Came To Stay, and I managed to attend her book launch in London just before everything went wrong. This evocative historical thriller stars Dina Demetriou, who arrives in London from Cyprus in the early 1950s. Although she’s forced to share a tiny, damp flat with her brother Peter, things look up when she gets a job repairing costumes at a theatre and meets the glamorous Bebba. However, Dina could never have predicted how completely Bebba will turn her life and her brother’s life upside down. She Came To Stay brings the fog and grime of postwar Soho vividly to life, evoking the glitter of the costumes Dina sews and the bars in which she drinks martinis. It has a light touch that’s lacking in a lot of historical fiction, perfectly conveying the feel of the era without overloading the reader with detail. It’s also a real pageturner, becoming more and more gripping as tensions tighten between Dina, Peter and Bebba. The Greek Cypriot background of the three central characters makes this story feel fresher and more original than much fiction set in the 1950s, and I particularly loved the way the writing conveys the insidious ‘Great Smog’ of 1952. Honestly, it was the perfect distraction! 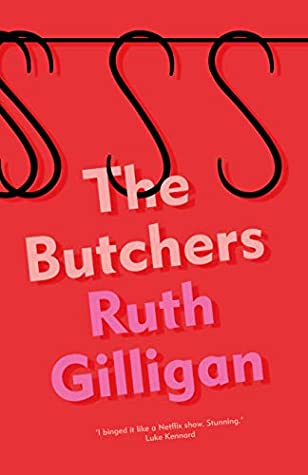 Ruth Gilligan’s fifth novel, The Butchers, is set in rural Ireland in the summer of 1996, as the BSE crisis kicks off and Irish farmers initially benefit from the collapse in British beef. It moves between four third-person narrators plus a series of interludes set in New York in 2018, where a photographer is about to exhibit a photograph of a dead man that was taken in an Irish slaughterhouse decades before. Grá is the wife of one of the eight Butchers, a group of men who move around the country slaughtering cattle in accordance with their own particular rites. Úna, her twelve-year-old daughter, dreams of becoming a Butcher herself someday, despite the fact that the order is closed to girls. In another county, Fionn, desperate to raise money for experimental cancer treatment for his dying wife, becomes involved in smuggling cows over the Irish border. Meanwhile, his son, Davey, is focusing on his Leaving Cert exams, determined to depart for the bright lights of Dublin, when he falls unexpectedly in love with somebody he’s just met.

I seem to have been looking for a farming novel that uses Celtic folklore this adeptly for some time; I was disappointed by Owen Sheers’ uneven novella White Ravens, which is Welsh rather than Irish, but which echoes The Butchers in its depiction of a woman who watches her brothers get involved in sheep-stealing after an outbreak of foot-and-mouth disease leads to the shooting of their own flock. However, despite the thematic echoes, the robustness of Gilligan’s prose is closer to writers like Fiona Mozley and Cynan Jones. All four of her narrators are completely convincing, but I was especially captivated by Fionn’s descriptions of swapping tags on cattle and printing new stamps on packets of beef in the depths of night. Gilligan treads a fine line with his characterisation, making him admit to ‘raising a fist’ to his wife and son just once, many years ago, but knowing he can never make things right; giving him a history of alcoholism but showing how religiously he now sticks to pints of coke; making him want to impress his fellow smugglers to demonstrate his masculinity but also emphasising that he is motivated by the thin prospect of saving his wife’s life.

The Butchers, by leaping from protagonist to protagonist, also deliberately elides or skips a number of climatic moments in its plot, such as the peak of a bar brawl or Davey’s first sexual encounter. This vignette-like approach worked for me, twisting this undoubtedly gripping story away from becoming a straightforward thriller and giving the more subtle scenes space to breathe. Gilligan also makes effective use of her setting, skilfully contextualising BSE for readers who are unfamiliar with it, and dropping references to Euro 96 and the Spice Girls while never slipping into gratuitous nostalgia. Having requested this on NetGalley some months ago, and noticing that its publication date was approaching, I started this novel out of a sense of duty; but it’s an unexpected, original and accomplished treat.

Have you read anything recently that has been an especially good distraction?