This is part of a very occasional series where I rewatch and review Black Mirror episodes. I’ve already written about ‘San Junipero’ and ‘Hang the DJ’. I only review episodes where I feel like I have something to say, so don’t expect this to be comprehensive. (I am a big fan of Black Mirror, so when I’m critical, it’s only because I hold the show to such high standards… and often I have more to say about episodes that I think didn’t quite work.)

WARNING: This post contains major spoilers for the Black Mirror Season 4 episode ‘Arkangel’. If you haven’t seen it and don’t want to be spoiled, do not read this post. 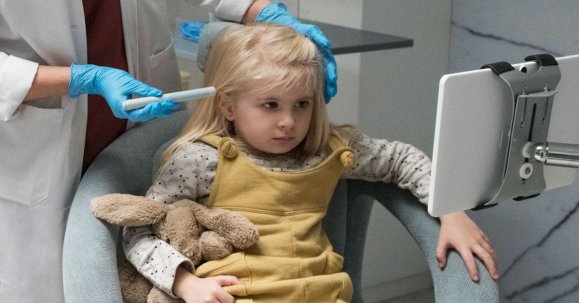 ‘Arkangel’ is Black Mirror’s modern childhood episode, an episode that writer Charlie Brooker thinks ‘only a parent could write’, that introduces a piece of technology that ‘it would be very hard for many parents to not agree to use’. That piece of technology is Arkangel, an implant in a child’s brain that allows the parent to track their every movement, to look through their eyes, and to impose ‘parental control settings’ on what they can see and hear. When single mother Marie first has Arkangel installed into her daughter Sara, Sara is a small child, and it seems essential to be able to see where she is when she runs away or to screen out the large dog that barks at her and scares her. But as Sara becomes a teenager, even though Marie has promised not to use Arkangel any more, she can’t resist the temptation to take the controller out of its box when Sara stays out too late one night.

The problem with ‘Arkangel’, for me, is, although it effectively uses a tried-and-tested Black Mirror technique by offering us two interpretations of the events that unfold, neither of those interpretations are very interesting. One: Marie is a control freak, children need to be exposed to the bad things in the world, and parents need to let go. This is backed up by Marie’s boyfriend, a motorcycle rider, who thinks that life is about taking risks; by Marie’s father, who points out that while she might have broken an arm as a child it didn’t do her any long-term damage; and by Sara’s experience as a pre-teen, when she is isolated from the other children at school because she can’t see the gory things they’re watching online. Two: Marie went too far with Arkangel, but there are obvious reasons why this technology is a good thing, so we can’t reject it so easily. Through Sara’s eyes, Marie realised her father was having a heart attack and was able to get him medical help; the teenage Sara, once free of Arkangel, strides out to accept a lift from a stranger without any thought for the consequences; and are the gory things Sara watched online as a child partly behind her vicious attack on her mother when she finds out the truth?

Both of these narratives about childhood and adolescence are already very familiar, and ‘Arkangel’ doubles down on the cliches by presenting a mother and a teenage daughter who have a completely stereotypical relationship. Fifteen-year-old Sara rebels by taking drugs and having sex, and lies to her mum about where she’s been. Rather than talking to Sara about this, Marie prefers to use Arkangel to spy on her; while this is an extreme reaction, it fits into the fictional parental playbook of teenagers who scream ‘You don’t understand me!” and parents who respond “You’re grounded!” This episode is watchable enough, but it never brings its characters to life in the same way as other Black Mirror episodes manage to do in an equally short space of time (not my favourite episode, but compare the presentation of the young American backpacker in ‘Playtest’, whom we care about as a person before horrible things start happening to him).

There was real potential in ‘Arkangel’. One alternative plot that I kept thinking about while rewatching the episode was: what if Marie had handed over control of Arkangel to Sara when she became a teenager? Arkangel is billed as a parental control device, but you could also manipulate your own settings to protect yourself from traumatic things you don’t want to see. Would this be a way of avoiding reality, or a sensible move to allow yourself to adapt to stimuli that scare you? ‘Arkangel’ pushes the idea that you can only get past your fear of something by exposing yourself to it – Sara only stops being afraid of the scary dog once she can see and hear it – but is that fair? (I know a lot of people who are still scared of dogs to this day because they were barked at aggressively as children).

‘Arkangel’ reflects recent sociological and historical work on modern Western childhood and youth, tapping into the argument that the reduction of children’s and adolescents’ freedom to roam independently in the last seventy years has been profoundly harmful. However, it’s not as squarely on the side of children and young people as it might appear on first viewing, by presenting Sara as violent and impulsive, unable to understand the consequences of her actions. By allowing Marie and Sara to collaborate over how to use this technology, ‘Arkangel’ could have presented both characters with truly difficult choices. Instead, Sara becomes a reckless adolescent, and Marie an abusive mother, fulfilling their tropes rather than questioning them.