We’re now halfway through #SciFiMonth, so I thought I’d check in with some thoughts on what I’ve been reading.

I was utterly captivated by Nina Allan’s The Rift, and her debut novel The Race is in the same vein. It presents what the Chicago Tribune called ‘an ingenious puzzle-box of a narrative’: four interlinked novellas, two set in our own world and two set in a near-future landscape devastated by fracking and focused around the racing of smartdogs, genetically modified greyhounds who can connect empathically with their human trainers. Some reviewers seem to think that the links between these narratives are a meta-commentary on the unnecessary divides erected between science fiction and literary fiction; while I agree that Allan’s work demonstrates why these two genres should talk more to each other, I prefer to read this novel more literally. Like The Rift, it suggests that there are junctions within our own world that lead us into parallel realities, although the two worlds may remain linked in unsettling ways. When people go missing, they may simply have crossed into another world. At first glance, the more overtly SF sections in The Race could be read as short stories written by one of the characters in our own world, Christy; however, the connections between the different novellas are not quite as simple as that. While I liked The Race, it did feel a bit like a warm-up act for The Rift, which weaves its strands much more tightly together and so is more complex, but also more satisfying; it also makes use of various different found texts, like newspaper articles, in a way The Race does not. However, like all Nina Allan’s novels, this is strong on atmosphere, and she manages to create very solid worlds out of what seems like very sketchy details. 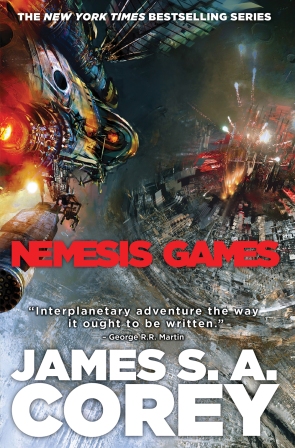 The Expanse series (written by two authors under the pen name James S.A. Corey) is set in a future where humanity has expanded outwards from Earth and colonised both Mars the meteorite belt, and the outer planets, but hasn’t cracked interstellar travel. The novel deals both with existing political tensions between these civilisations and with the new problems introduced by the discovery of the protomolecule, an infectious alien agent that has the power to radically alter life forms (yes I had to crib a lot of this from the very useful Expanse Wiki). I loved the first three novels, but then started losing track of the series. With multiple point-of-view characters operating in an extended world, it feels a lot like George R.R. Martin’s A Song of Ice and Fire in space – it’s notable that one of the co-authors, Ty Franck, first created this universe as a setting for a tabletop RPG and also works as GRRM’s assistant. For this reason, I suspect that the series requires at least one re-read every time a new instalment comes out so you can keep track of what’s going on. Unfortunately, the Expanse series just doesn’t have the depth of ASOIAF, and I can’t see myself re-reading the earlier volumes (except perhaps Leviathan Wakes, which operates as a supremely horrific horror story as well as the beginning of this space opera). Nemesis Games, the fifth in the series, helpfully reduces its point-of-view characters back to four of the original protagonists, which makes it a much easier and more enjoyable read than its predecessor, Cibola Burns, but I was still aware that I wasn’t really following the story at times, especially in the first half. If you want to try this series, I suggest binge-reading the lot. 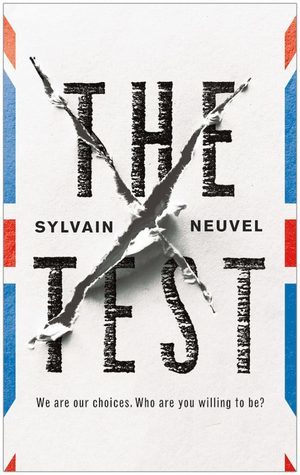 Sylvain Neuvel’s The Test starts with Idir, a kind, likeable Iranian Muslim man, sitting a futuristic version of the British citizenship test. I don’t want to say much more about the plot because the book is so short (indeed, this counts as an accidental Novellas in November entry – I didn’t realise how short it was when I started reading it!). Comparisons with Black Mirror are justified, but I think this would have worked a lot better as a Black Mirror episode than it does as a novella, simply because Neuvel can’t resist the temptation to tell the reader everything he wants them to know, and this wouldn’t be possible if this was adapted for TV. It also illustrates my usual problems with novellas – it would have worked better either as a disturbing, confusing short story or as a full-length novel where Neuvel could take the time to explore the issues he raises more subtly.

I also wrote a Re-Read Project post on Margaret Atwood’s The Handmaid’s Tale as part of #SciFiMonth, which is here. This also fits nicely into Margaret Atwood Reading Month, or #MARM, run by Naomi and Marcie!

Are you taking part in #SciFiMonth? Do you have any SF recommendations?

15 thoughts on “#SciFiMonth: Halfway Through!”