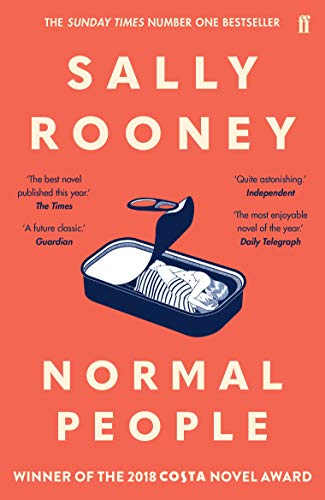 Jeanette Winterson grew up in an English Pentecostal family. Her adoptive parents were shocked when she came out as a lesbian, and had their church conduct an exorcism. Winterson ended up leaving home at sixteen, and broke contact with her family shortly after. Famously, she published a fictionalised account of her childhood and adolescence, Oranges Are Not The Only Fruit, when she was only twenty-five, but this memoir addresses her experiences from her own point of view. The title has a simple origin. When Winterson told her mother that she had fallen in love with another woman, and that this relationship made her very happy, her mother said: ‘Why be happy when you could be normal?’

While few people would put this question as bluntly as Mrs Winterson (Winterson refers to her mother in this way throughout Why Be Happy When You Could Be Normal?) I think that it’s a question that a lot of us grapple with. That’s certainly true for the protagonists of Sally Rooney’s second novel, Normal People, Connell and Marianne, who meet at school in Carricklea and carry on an one-off relationship through their years at university in Dublin. While Marianne’s family are far better off than Connell’s – Connell’s mother cleans their house – Marianne’s class privilege does little to help her at school, where Connell possesses all the social cachet. When they start sleeping together, both simply assume that the relationship should be kept secret. Cleverly, Rooney reverses the power dynamics in Dublin, where it is Marianne who is striving for social success, whereas Connell takes the brunt of not only being working-class but rural. Both characters feel the pressures of being what Marianne calls ‘normal people’, a state that is both aspirational and stifling.

Like Connell, Winterson came from a working-class family in a relatively out-of-the-way location (in her case, Accrington) and went to a glamorous world-class university (in her case, Cambridge). She writes so well about both class and religion. Despite the oppressive nature of the Pentecostal church, she remembers how she valued the sense of community it brought and the simple fact of ‘having somewhere to go in the evening’ in a declining north-west England industrial town where communal facilities had been steadily stripped away. Not connecting this to the bigger picture at the time, Winterson, as a young woman, voted for Thatcher in 1979, valuing what she seemed to represent: a self-made woman in a world where left politics felt dominated by masculine trade unionism. In contrast, both class and (especially) religion are relatively slight in Normal People. While class differences feed into the consistent miscommunication between Connell and Marianne, Rooney seems more interested in analysing how they misunderstand each other word by word and sentence by sentence, rather than suggesting that there are macro factors that keep them apart. The sadness of their story is that it could so easily have been different. In terms of politics, Marianne talks vaguely about Marxism, but that’s as far as it goes.

Rooney is a wonderfully observational writer. This Goodreads review seems to me to miss the point of her prose; it accuses her of piling up irrelevant details, but actually the content of this quote is who is doing what:

Marianne goes inside and comes back out again with another bottle of sparkling wine, and one bottle of red. Niall starts unwrapping the wire on the first bottle and Marianne hands Connell a corkscrew. Peggy starts clearing people’s plates. Connell unpeels the foil from the top of a bottle as Jamie leans over and says something to Marianne. He sinks the screw into the cork and twists it downwards. Peggy takes his plate away and stacks it with the others.

While I don’t think this is the strongest example of Rooney’s writing, there’s a certain power dynamic here that we can see through Connell’s eyes; Marianne bringing out more bottles; handing him a corkscrew while her current partner, Jamie, tries to get her attention; Peggy taking charge through clearing the plates.

Ordinary People is an addictive read, and I found it less limited than Conversations With Friends (the critics who have suggested that Rooney has somehow regressed because she’s writing about characters who are chronologically younger than her last set of protagonists need to think again). However, I have to confess that I’m baffled as to why it’s being hailed as ‘a future classic’. I feel like I’ve read quite a few novels like this, most notably Belinda McKeon’s beautiful Tender. I’d still put it on my personal shortlist for this year’s Women’s Prize, but this is partly due to the weakness of the overall longlist rather than feeling blown away by this book.

What I wanted it to address, I suppose, is something that’s inchoate in the story but never quite comes to the surface: when we are teenagers, we often want more than anything to be ‘normal people’, but as we find out how easy it is to be normal, we strive to become exceptional again. This happens most obviously to Marianne when she’s accepted by a popular set at university, and is seduced into putting her own needs and interests to one side. In Winterson’s case, I get the sense that, after what her mother said to her, being ‘normal’ was never on the agenda; so her wonderful memoir is more about the cost of living on the other side of normality, which may be the right place to be, but is often a very painful space as well.

11 thoughts on “Unhappy People: Why Be Happy When You Could Be Normal? (Jeanette Winterson) & Normal People (Sally Rooney)”