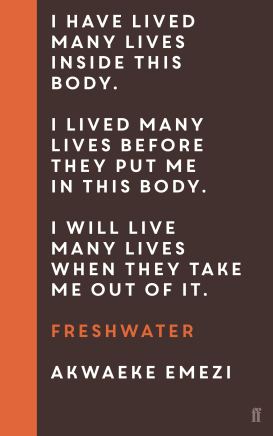 One does not challenge their chi to a wrestling match.

Born in Nigeria to Igbo and Tamil parents, Ada is inhabited by ogbanje, an Igbo term that might translate as ‘evil spirits’ but, as Freshwater, Akwaeke Emezi’s debut novel, makes clear, is actually much more complicated. ‘Ogbanje’ are also ‘children who come and go’, or what we might think of as changeling children, children of gods who don’t properly belong in this world. To be an ‘ogbanje’, as Ada is, is to be marked out as special. Ada is also a practicing Christian, but while her internal ogbanje recognise the presence of what they call Yshwa, or Christ, they don’t perceive him as having any particular status, and have their own take on his motives: ‘while he loves humans… what they forget is that he loves them as a god does, which is to say, with a taste for suffering’. One of Ada’s selves, Asughara, is particularly resentful of Yshwa, whom they call ‘that fucking resurrected bastard’ after losing an argument with him.

If this all sounds a little metaphysical, you’re not alone; I approached Freshwater with some trepidation. However, I ended up engaging with it a lot more easily than I expected. Emezi’s writing makes the conflict between Ada and her various selves real and concrete, more like the interactions between the gods of a Greek myth than the inner monologue of a person with multiple personality disorder. This is obviously deliberate. One of the things that’s most brilliant about Freshwater is its refusal to line up Ada’s experience with Western psychological or psychoanalytical categories. Insofar as these diagnoses are useful as a way of understanding our experience, Emezi suggests that Ada can most effectively come to terms with herself by using the language of Igbo belief. Because of this, and despite its longlisting for the Wellcome Book Prize, Freshwater doesn’t feel like a novel about mental illness but more a novel about coming to terms with the relationship between self and world.

Emezi writes particularly well on Ada’s struggle to live in a physical body, observations that seem to be drawn from Emezi’s own experience (they identify as non-binary). This manifests not exactly as gender dysphoria but as an inability to reconcile how one sees oneself with how others see us. After Ada has a breast reduction, she starts wearing dresses more often; one of her friends can’t understand this, saying ‘Most people get it done to be more masculine’. But for Ada, the surgery wasn’t intended to help her fit into a particular gender category more easily but to complicate people’s impressions of her. If Freshwater doesn’t quite work at times, it’s because of its closeness to Emezi’s own life, and the redundancies that inevitably creep in when you try and compress life into fiction (there seem to be too many temporary lovers, and I wasn’t sure what purpose Ada’s siblings served). Nevertheless, this is a startling novel that deserves its place on both the Women’s Prize and Wellcome Prize longlists – and I wish it had gone forward to the Wellcome shortlist.