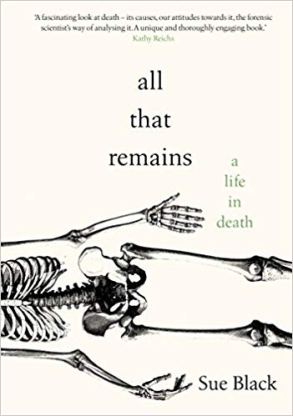 All That Remains, written by forensic anthropologist Sue Black, thinks about the significance of cadaver identification and the fates of dead bodies in a number of contexts: identifying victims during civil war in Kosovo, the preservation of donor corpses for medical students to dissect, and seeking clues to the cause of death of skeletons found in isolated places. Some bits of it worked for me and some bits didn’t; Black’s voice is not especially sympathetic (although she occasionally made me laugh!), and she sometimes falls prey to the temptation to discuss a particular professional achievement in too much detail. However, certain chapters were both informative and thought-provoking. I loved the section when Black clearly explains the difficulties of identifying the height, sex, race and age of a skeleton, and I’ll probably be nit-picking a lot of crime novels on this point from now on (no, dental records are not the only way to identify bones, and so smashing up the teeth of a corpse and substituting different ones isn’t going to effectively hide your crime, murderers in Tim Weaver’s ridiculous Chasing the Dead).

Black also makes a passionate case for the necessity of appropriately identifying bodies, even when the cause of death is known and the fact of death is certain, to allow families to properly grieve and to restore some dignity to the dead. This is a topic I find difficult; it’s always seemed to me to be wasteful to expend huge resources to retrieve dead bodies, and I don’t see that the dead mind whether or not they have dignity, as long as their corpse isn’t being desecrated and they don’t end up on public display. However, some of the incidents that Black describes – in particular, the horrific death of an entire family except for the father in Kosovo – have made me think that this kind of work and expense is absolutely appropriate in certain circumstances. This commitment, however, sits in strange contrast to her proclaimed ‘unsentimental’ attitude towards death.

Heart, by cardiologist Sandeep Jauhar, has been longlisted for this year’s Wellcome Prize. It’s a stroll through the history of heart surgery interwoven with Jauhar’s own career as a surgeon and his own family’s experience of heart disease – a history that’s catching up with him, as he discovers plaques in his own coronary arteries during a CT scan. Jauhar writes better about cardiology than does Stephen Westaby in Fragile Lives, but his prose is still workmanlike rather than memorable; it never reaches the heights of Henry Marsh’s Do No Harm or Atul Gawande’s Being Mortal. The structure, at times, was a bit annoying, as Jauhar deliberately interweaves the story of a single real case between chunks of history and medical detail – I found that I kept skipping forward to find out what happened to the patient, as the intervening material was not directly relevant to my understanding of the case. I was also sorry that there was so little about heart transplants, purely because organ transplantation is a particular fascination of mine.

Nevertheless, I enjoyed Heart more and more as it went on, and unlike Westaby, Jauhar himself comes across as likeable and modest – he manages to write about his own personal experiences without forcing himself to the forefront. I preferred the technical medical bits to the gallop through the history of cardiology, finding the chapters on ventricular fibrillation, stress and implantable defibrillators, which can link the two by causing panic attacks in patients who repeatedly receive unexpected shocks to kick their hearts back into rhythm, especially interesting. There are also unintended cross-links with Black’s book. Both writers describe the death of their parents, and how it feels to be part of the oldest generation of your family that remains; as Jauhar puts it, ‘while your parents are alive, there is always someone who thinks of you as a child.’ Both muse on the fact that a sudden heart attack is both the most welcome and the most fearsome way to die, although they reach different conclusions; Jauhar welcomes the heart as ‘a safety valve that can facilitate a quick and humane end’, whereas Black admits that despite the mercifulness of a quick death, she herself wants to spend at least a little time dying so she can put her affairs in order and understand what it feels like to die. Both worthwhile reads, if a little short on literary skill.

Thanks to Rebecca for sending me her proof copy of Heart!

7 thoughts on “The quick and the dead”