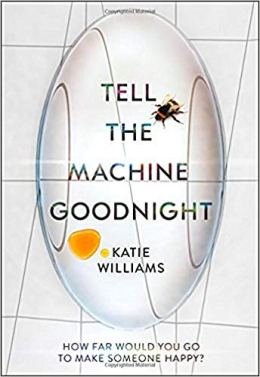 Tell the Machine Goodnight, Katie Williams’s first novel for adults, is clever, gripping and smoothly written, if a little insubstantial. The central conceit is that, in a near-future world, the Apricity machine can give you a short list of actions that will make your life happier – even if they seem at first to be completely illogical (the first customer we see is told to amputate the upper section of his right index finger). The book hovers somewhere between a continuous narrative and a collection of interlinked short stories – we do return to characters and plot-lines, but we also dive off into tangents that are not always tightly related to Apricity, such as the couple of chapters near the end that explore the celebrity of Calla Pax, an actress known mostly for dying in different, gruesome ways in body horror films.

Williams’ earlier experience writing YA fiction is especially evident in the chapters concerning Rhett, whose mother Pearl works for Apricity and who is currently struggling with an eating disorder. However, these chapters don’t feel jarring, and Rhett’s plot thread was actually among one of those I found most interesting, as Pearl tries to deal with the idea that the machine thinks that the only way to make her son happier is for him to harm somebody else. Although, again, this material didn’t have a great deal to do with the Apricity machine, I also liked Rhett’s investigations into the recent humiliation of his friend Saff at school, and his later friendship with his roommate Zi at college, when they climb ‘imaginary’ [virtual reality] mountains together.

As this suggests, Tell the Machine Goodnight is less about one specific idea than a wider consideration of how technology affects our responses to other people, from the idea that pain and fear can be recorded and transmitted to a film audience, to the ability to meet up with a friend in a virtual space. As this is a common theme in recent fiction, the novel doesn’t feel especially original, but I liked its balanced consideration of both the positive and negative impacts of tech, and its Black Mirror-esque interest in thinking about what humans do with technology, rather than assuming that the machine itself is all-powerful. I’d certainly like to read more by Williams.

When Emma was a teenager, a summer at Camp Nightingale turned into a nightmare when the other three girls in her cabin vanished without a trace. Now twenty-eight, she’s returned as a resident artist with three new teenage girls to supervise. Haunted by the unsolved mystery in her past and the lies she told, she determines to find out what happened to her former acquaintances – especially when it seems that somebody may be out to get her in the present day.

This formulaic psychological thriller is somewhat uplifted by its summer camp setting. I have never actually been to summer camp, but this took me right back to all the ghostly children’s and YA books and TV set at summer camp that I loved when I was younger – especially the Are You Afraid of the Dark? episode, ‘The Tale of Watcher’s Woods’, and the Sweet Valley Twins Super Chiller The Secret of the Magic Pen. Riley Sager’s previous novel, Final Girls, started off well and got increasingly sillier as it went along, and to an extent, the same is true of Last Time I Lied, which also sags in the middle, though the climax is satisfyingly atmospheric.

I’ve been discussing the ‘anachronistic’ nature of this novel on Goodreads with Rebecca, and it strikes me that it pulls off the rare feat of being doubly or perhaps triply anachronistic. As this Kirkus review points out, both the 2018 and 2003 settings feel off in their details. While I disagree with the precise example cited in the review (I don’t see why a teenager wouldn’t freak out about her first period whenever she got it), I would agree that the 2003 summer felt wrong in general; I kept on thinking that it was set in the 1970s or 1980s, and hence thinking that Emma was much older than she is. There’s also a historical bit that comes to light when Emma is researching the nineteenth-century history of the campsite that is just very silly; I won’t go into detail to avoid spoilers.

Rachel Heng’s debut, Suicide Club, is set in a world where longevity is valued above all else. Lea, our central character, already has a predicted lifespan of three hundred years, and is hoping that if she does everything right, she can become part of the first group of ‘Immortals’. However, her life takes an unexpected turn when she bumps into her fugitive father and is put under Observation for being ‘antisanct’, or not ‘life-loving’ enough. As Lea tries to work out why this is happening to her, she’s drawn into the world of the Suicide Club, a group of people who publicly take their own lives to expose what they see as the horror of living forever, and meets Anja, whose mother’s body has broken down even as her mechanical heart keeps on beating.

This is obviously a concept-drive novel, but unfortunately, I found that Suicide Club was more interested in short-term intrigue than in believable worldbuilding. It touches on some of the issues raised by Mark O’Connell’s wonderful To Be A Machine, but fails to think with any seriousness about the wider implications of the world it imagines. To suggest just a few possibilities: what does this do to ideas about age, and what it means to be a fourteen-year-old, a thirty-five-year-old, a seventy-year-old? The novel tells us that formal education now lasts much longer, but doesn’t even attempt to consider how ideas of life stages might have changed in consequence. Has women’s (and men’s) fertility been extended alongside their lifespan, or must childbearing be crammed into what must feel like a much smaller window – and is this why the birth rate has dropped? Why are certain people selected for life extension therapies while others are not? (The novel suggests this has something to do with money and connections, but doesn’t tie up the loose thread.) Other details – such as the idea of a ‘stock exchange’ in human organs – are clearly dropped in for pure shock value. Why would such a stock exchange be needed in a society that can build hearts from scratch?

Suicide Club also falls into the very familiar dystopian trap of making its futuristic world utterly miserable, refusing to suggest that there might be anything better about the society it imagines. Even when Lea notes that work days are now kept strictly to nine to five, because overwork was identified as a key driver of ill health, Heng has her reminisce about all-nighters spent at the office and the camaraderie this built with her co-workers. Really? This leads to the uncomfortable glorifying of the Suicide Club, and the ultimate hammering home of the message that living forever is a Bad Thing. Again, O’Connell’s questioning approach to such a topic is absent. Living three hundred miserable years because you can’t enjoy anything for fear it might make you unwell may be undesirable. Living indefinitely (there’s no suggestion that becoming Immortal means it is impossible for you to ever end your life), presumably with far less restrictions, does not seem to necessarily be a bad thing. Suicide Club wants to tell us that our obsessions with exercise, health food, sleep and dieting are wrong (fair enough), but it does this against the background of a society that’s so different from ours that this message no longer makes any sense.

PS I once read a very good novel called The Suicide Club by Rhys Thomas, that seemed to receive no critical attention whatsoever. It’s nothing like Suicide Club, but I thought I’d mention it as we’re here.