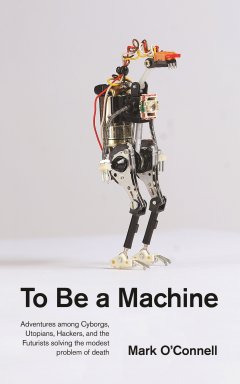 The eighth-century English monk Bede described human life on earth as like a sparrow who flies into a banqueting hall from a storm, swoops through the warmth and comfort of the hall, and then flies out again into the wind.* To Be A Machine, Mark O’Connell’s exploration of the twenty-first century movement known as transhumanism, is basically about why we can’t stay in the banqueting hall. Why is the human mind confined to bodies that so quickly age, break down and finally cease to function? Should we accept death, or fight it? Is there a way to ‘liberate’ the mind from the body, or are the two inseparable? And how will artificial intelligence change our relationship with the world? O’Connell highlights how this postmodern set of beliefs often bears a close similarity to the thought of early Christians such as Bede and St Augustine. Transhumanism, like early Christianity, can seem both hopelessly optimistic and grimly deterministic. As Augustine wrote in City of God: ‘As far as this mortal life is concerned, which is spent and finished in a few days, what difference does it make under what rule a man lives who is soon to die?’

The idea of being ‘uploaded into the Cloud’, or attaining digital immortality, is perhaps familiar to us from sci-fi treatments of the idea: for example, Black Mirror’s ‘San Junipero’. But O’Connell digs deeper, not only asking whether or not this will ever be possible, but what else it might be used for. To Be A Machine spends a lot of time with people on the edge of scientific respectability, although it’s often unclear how far they’ve travelled. (While reading the book, I kept thinking about how absurd modern medical innovations such as heart transplants must have seemed even shortly before they became possible.) O’Connell talks to Dutch neuroscientist Randal Koene, who’s working on what he calls ‘whole brain emulation’, or the uploading of minds. However, immortality ‘wasn’t something that especially exercised Koane as an end in itself.‘ Instead, O’Connell finds, he’s more concerned with ‘the limitations of creativity… how many things he wanted to do and experience, and how little time was allowed for the pursuit of those projects.’ (Back to the bird in the banqueting hall.) In Koane’s words, ‘I couldn’t work on some problem for a thousand years, or even travel to the next solar system, because I’d be dead by then.’ Other technological advances are also inadvertently feeding into whole brain emulation. Todd Huffman, a US technology entrepreneur, is working on technology to scan brains, which is currently ‘useful for more immediate projects like analysing pathologies for cancer research’ but could eventually be useful for emulation.

O’Connell covers so much in To Be A Machine that it’s impossible to do it all justice in a single review: other topics include AI and the technological singularity, robots, ‘cyborgs’ who are integrating technology into their own bodies, cryonic suspension and radical life extension. The book made me think so many things that I’m still sorting through them all now, weeks after finishing it. And yet one of its most attractive qualities is O’Connell’s honesty about his own reactions to the various technologies he encounters: he is fascinated, appalled, won over and turned off all at the same time. Often, I found that his description of his own internal questions would mirror mine. This is a really fantastic book, and for me, a clear front runner for the Wellcome Book Prize. 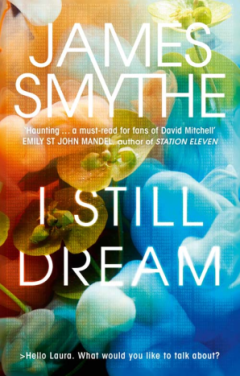 Yes, I do find that tagline a little creepy.

James Smythe’s sixth novel for adults, I Still Dream, takes lots of the technology that’s explored in To Be A Machine and runs with it. The novel kicks off in 1997, when seventeen-year-old Laura Bow is designing an artificial intelligence, Organon, while constantly arguing with her mother about the amount she spends on dial-up internet and how she’s tying up the phone line (“from now on you’re allowed to use it at weekends only, when it’s cheap, and even then, only for an hour.”) This first section is an incredible set-piece in its own right, tying up with a neat twist ending where Laura realises she may have got more than she bargained for with Organon. I Still Dream then jumps forward in ten-year chunks, as big companies get in on the development of AI, and Laura and Organon are first sidelined, then shafted. However, will she and Organon be needed again when everything goes wrong?

It was pretty clear to me from the start – but again, perhaps only because I read To Be A Machine first – that this novel was going to deal with the technological singularity, the idea that artificial intelligence will suddenly accelerate beyond our capacity to control it. However, it touches on other transhumanist themes that I wasn’t expecting, including the prospect of being uploaded into the cloud (the novel takes its title, very satisfyingly, from Kate Bush’s 1985 hit ‘Cloudbusting‘). It also considers the fragility of the human body through a range of individual stories, from Laura’s father, who suffered from a brain tumour, to her father-in-law, who develops dementia, to Laura herself as she ages and dies. I Still Dream hence brings the questions posed by To Be A Machine vividly alive: how can we stay so attached to our physical bodies and brains as they start to glitch, and what we think of as our most essential self muddles and fades in the face of disease?

Structurally, I Still Dream didn’t quite work for me: its time jumps coupled with switching narrators kept jolting me out of the story, and some of the segments were inevitably more engaging than others. However, it’s an incredibly thought-provoking novel (having read and loved Smythe’s The Explorer and The Echo, I’d expect no less from him) that never simply presents technology as bad or good but instead asks questions about how we use it. As Laura says when she warns the world about the dangers of a rival AI, SCION: ‘SCION’s like a toddler. And like any toddler, you teach it well, teach it morality and concepts of good and bad, and maybe it’ll grow up to not be a complete shit. But if you do nothing but sit it down in front of games… tell it that if something’s a danger to it it should fight back first? Where does that end?’ And Smythe always keeps the humanity of his story in sight. I found the final section of I Still Dream desperately sad, not because of any apocalypse caused by artificial superintelligence, but because of the familiar process of losing what we love as we age away from it.

*This parable is mentioned in Bernard MacLaverty’s Wellcome-longlisted Midwinter Break.

14 thoughts on “Wellcome Book Prize Shortlist: To Be A Machine & James Smythe: I Still Dream”