I’m partway through two of the other titles on the Wellcome longlist, so I thought I’d write a little bit about them before the shortlist is announced tomorrow. 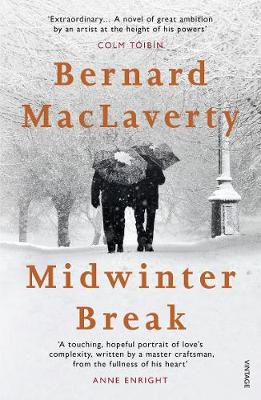 Bernard MacLaverty’s Midwinter Break is his fourth novel, but his first for the past sixteen years, so I wasn’t especially surprised to find I’d read nothing by him before (this isn’t the sort of thing I’d have chosen to read as a fifteen-year-old!) It focuses on an ageing Irish couple, Gerry and Stella, who have travelled for a short break in Amsterdam from their home in Scotland. Gerry has a problem with alcohol; Stella, reliant on her Catholic faith, is planning to leave him. MacLaverty precisely and perfectly charts this couple’s little rituals, shared knowledge and familiarities, even as they both feel they are living through the twilight days of a relationship that was once so much more. Both also think back to difficult times in their past during the Troubles. MacLaverty is especially good on the affection that Gerry still feels for Stella. He remembers bumping into her accidentally during an earlier period in their lives: ‘Her eyebrows went up with delight and she smiled her smile. He was elated and stood there blushing because he felt such elation. It was like the first time they’d met. And yet they’d been married about twenty years.’

The repetition of key phrases shows how much this couple know about each other even as they become distanced: both Stella and Gerry think of getting to sleep as ‘getting over’ but laugh when one of them says it out loud; Gerry looks out for places that serve coffee in small cups, as Stella likes it; when Stella says ‘Miracles come in all sizes. I should know’, Gerry knows immediately what she’s talking about. I’m about a third of the way through Midwinter Break, and looking forward to reading the rest. And yet, despite MacLaverty’s excellent prose, I can’t see it reaching the Wellcome shortlist, simply because the medical theme is, once again, very slight. 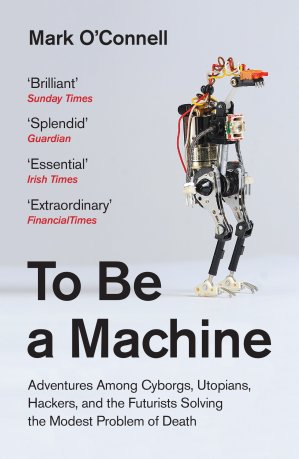 Mark O’Connell’s To Be A Machine: Adventures Among Cyborgs, Utopians, Hackers and the Futurists Solving the Modest Problem of Death is a book that interested me more and more as I thought about it. Having read the first two chapters, I’m certainly keen to read on. O’Connell has decided to investigate ‘transhumanism – a movement predicated on the conviction that we can and should use technology to control the future evolution of our species… human existence, as it has been given, is a suboptimal system.’ He promises to think about the prospect of human cyborgs; minds uploaded into the cloud; and robots and AI. Transhumanism, he argues, seeks ‘liberation from biology itself’ which could also be seen as ‘a final and total enslavement to technology.’ Given how much I like Black Mirror, which often explores these kinds of questions, I’m keen to read more of To Be A Machine even if it doesn’t make the shortlist. My main concern with the book is how far O’Connell can balance his view on transhumanism. In short, I don’t want him to become a zealous convert, or to decide that All Technology Is Bad. He’s doing a good job of staying open-minded so far.

So what are my predictions for the shortlist? Like Rebecca, I have a mix of wishes and guesses:

What are other people’s thoughts on the Wellcome prize shortlist?