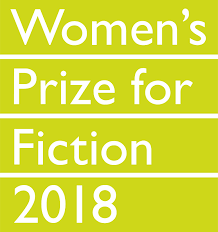 The Women’s Prize for Fiction Longlist 2018 is out! To my surprise, I’ve already read half of the sixteen longlisted titles. Here’s what I thought of the ones I’ve read, with links to my reviews where they exist.

I loved Kamila Shamsie’s Home Fire, Jesmyn Ward’s Sing, Unburied, Sing, Fiona Mozley’s Elmet and Imogen Hermes Gowar’s The Mermaid and Mrs Hancock. (I especially love that Gowar only realised that she was eligible yesterday, and Shamsie got the news while in midair). I’d be very happy to see any of these novels win the whole thing.

I enjoyed reading Jennifer Egan’s Manhattan Beach – its scenes of diving in the New York harbour during the Second World War are especially strong – but it’s uneven compared to Egan’s earlier work, and I’d be surprised if it was shortlisted. Elif Batuman’s The Idiot was just too much of a good thing for me, though I’m pleased to see it longlisted, especially as it seems to have received little attention.

Unfortunately, Sarah Schmidt’s See What I Have Done and Gail Honeyman’s Eleanor Oliphant Is Completely Fine were probably two of the titles I most strongly disliked last year, and I was praying for the latter, in particular, not to be included on the longlist. (I found Schmidt’s writing style deliberately repulsive, but the fact it evoked such a strong reaction in me probably means there’s something to be said for it).

Of the longlisted titles I haven’t read, I was already planning to read Jessie Greengrass’s Sight, Meena Kandasamy’s When I Hit You, and Kit de Waal’s The Trick to Time. The one title I hadn’t heard of was Charmaine Craig’s Miss Burma, but it looks pretty intriguing.

I’m less interested in Nicola Barker’s H(A)PPY, having struggled with both Burley Cross Postbox Theft and Darkmans, but I do feel she’s a writer I ought to appreciate. The lukewarm reviews of Arundhati Roy’s The Ministry of Utmost Happiness have put me off it somewhat, and I’m worried that Joanna Cannon’s Three Things About Elsie will be too sweet for me, though in fairness I’ve never read anything by her. Finally, Rachel Seiffert’s A Boy in Winter is off-putting to me simply because it deals with the Third Reich, although I have been surprised before by how authors can re-invent this very familiar material.

What’s missing? Like Hermes Gowar, I can never remember what’s eligible! I was surprised not to see Lidia Yuknavitch’s The Book of Joan after rave reviews from bloggers, and Sally Rooney’s Conversations with Friends after its winning the Young Writer of the Year Award. Ali Smith’s Winter was strongly tipped but I’m finding Smith’s novels increasingly repetitive (having been a big fan for many years) and am not really bothered not to see it there. Overall, despite the two titles I couldn’t stand, I’m impressed by the strength of the longlist, and the number of interesting titles to investigate.

What are other people’s thoughts on the 2018 longlist?