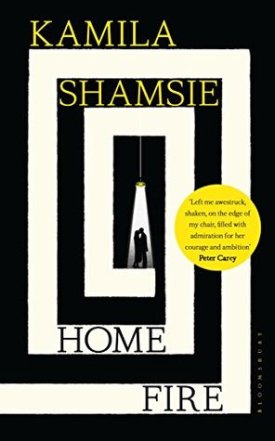 Having struggled with both of the other novels by Kamila Shamsie I’ve read, A God in Every Stone and Burnt Shadows, and having heard that Home Fire suffered from the same faults, I almost didn’t pick up this novel. But I’m so glad I did. In the past, I’ve struggled with Shamsie’s flat characterisation and familiar themes, and haven’t found her writing especially interesting. Funnily enough, I can’t say that any of these faults are entirely absent from Home Fire – but it somehow blossoms in a way that neither of its two predecessors did, perhaps partly because it’s so contemporary. Home Fire starts off with Isma, a young British Muslim woman who’s just undergone the ordeal of being held at security for so long that she’s missed her flight to the US. Isma is going to start a PhD in Massachusetts after years of bringing up her two orphaned siblings, Parvaiz and Aneeka. We immediately see that her relationship with Aneeka is not just loving and protective, but mutually close, as the sisters’ differences enable them to support each other through a world that is so frequently hostile. Before Isma heads off to the airport, they practice the anticipated interrogation together:

‘ “You know you don’t have to be so compliant about everything,” Aneeka had said during the role playing… “For instance, if they ask you about the Queen, just say, ‘As an Asian I have to admire her colour palette.'”… Instead, Isma had responded, “I greatly admire Her Majesty’s commitment to her role.” But there had been comfort in hearing her sister’s alternative answers in her head, her Ha! of triumph when the official asked a question she’d anticipated and that Isma had dismissed, such as the Great British Bake Off one.’

However, we realise immediately that Isma and Aneeka’s brother Parvaiz is missing, and both sisters are angry at him; neither have spoken to him in months. Shortly after, we find out that Parvaiz has been recruited by ISIS and has joined its media division in Syria, following in the footsteps of his father, a jihadi who died after being tortured in Afghanistan – not quite reaching Guantanamo Bay.

Both Isma and Aneeka are compelling characters, adopting very different ways of handling their ethnicity, their faith, and their sexuality, but never falling into the schematic strokes that, for me, often dogged Shamsie’s characterisation in her earlier novels. Isma is ambitious and likeably grave, but while the world takes her as a stern advocate for the rights of Muslims and of hijabi, she struggles with the simple feeling of having a crush, of wanting to be liked in the same way as she likes somebody else. She also gets the best line of the novel. In Amherst, Isma meets Eamonn, the son of infamous Conservative Home Secretary, Karamat Lone, who in order to establish his own credentials as a Muslim in government, has cultivated a reputation for being ‘strong on security’, arguing that British Muslim communities need to learn to integrate better and eroding the human rights of British citizens engaging in terrorist organisations abroad.  Isma knows who Eamonn is, and realises that the pride he takes in being his father’s son, and wanting to live up to that legacy, makes it hard for him to hear any criticism of Karamat. The same kind of feelings, after all, have driven her brother to Syria; the desire to be seen as a man in his own right. ‘[Fathers] are our guides into manhood,’ Eamonn tells her. ‘She’d never really understood this,’ Isma thinks. ‘For girls, becoming women was inevitability; for boys, becoming men was ambition.’

Aneeka is a high-flyer in her own right, starting a law degree, and sharply aware of how to navigate as a Muslim woman in London and on the internet. She stays over with boyfriends but makes sure to find time for daily prayers, telling one lover when he asks her ‘What were you praying for?’: ‘Prayer isn’t about transaction, Mr Capitalist. It’s about starting the day right.’ And as we see throughout the course of the novel, she can be manipulative and resourceful when she needs to be. But Home Fire is split into five sections, each narrated by a different character: Isma, Aneeka, Parvaiz, Eamonn and Karamat. And the two young men, in particular, do revert slightly to stereotype in contrast to the richness of the female cast. Their relationships with their own race and religion are much more straightforward, and they act as foils to each other. Eamonn is utterly determined to reject his Muslim heritage: ‘It was London’s Muslim population who had turned their backs on Karamat Lone and voted him out… All because he expressed a completely enlightened preference for the conventions of a church over those of a mosque, and spoke of the need for British Muslims to lift themselves out of the Dark Ages if they wanted the rest of the nation to treat them with respect.’ He’s forced to question those beliefs, but this doesn’t noticeably deepen him as a character. Meanwhile, Parvaiz is driven to go to Syria for predictable reasons and changes his mind in a predictable way, longing to return to his safe multicultural British life:  ‘Mo Farah at the Olympics, Aunty Naseem’s commemorative cake tin from the Queen’s Golden Jubilee. London. Home.‘ Karamat is a more satisfying narrator, although his own story is somewhat overshadowed by the horrifyingly gripping events of the end of the novel.

Home Fire left me genuinely upset about what happens to the small family we are introduced to at its beginning  – something that might seem obvious, given the violence of its events and the fact that it’s loosely based on the Greek tragedy Antigone, but in fact it’s rare for books to leave me with this kind of emotional legacy. I’m still thinking about it – and telling other people about it – more than a week later. Shamsie’s writing can still be workmanlike, her characterisation is not consistently complex, and she’s still not saying anything especially new in the big themes of this novel, although one could argue that a lot of the significance is in the detail – how Isma cares how her hair looks despite wearing a headscarf, how Aneeka is wary of Googling While Muslim, how Parvaiz lost some photographs of his father as a child because they were confiscated by Special Branch investigators. It’s made me wonder if it’s the weight of historical settings that dragged down her last two books, I now want to turn to one of her earlier contemporary novels. But in short, it’s not surprising this was longlisted for the Booker, and tipped as a likely candidate for the shortlist, even though it didn’t make it there. It’s a remorseless, intelligent, and utterly gripping read.