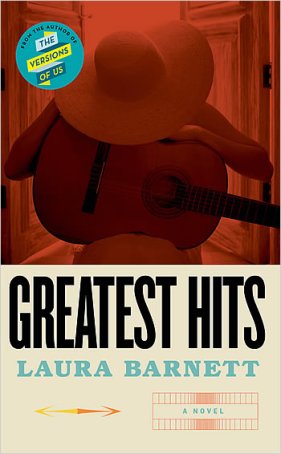 Laura Barnett’s debut, The Versions of Us, had a clever, high-concept pitch: ‘What if one small decision could change the rest of your life?’ Its Sliding Doors-style narrative followed three versions of the lives of star-crossed lovers Jim and Eva, pivoting around a single moment when they either meet or don’t meet as students in Cambridge. Ultimately, I found it frustrating; the need to cover three versions of everything in Jim and Eva’s stories, from marriages to careers to children, made all three stories feel short-changed. It also became clear that Barnett and I have different ideas about what this concept is good for; while I wanted The Versions of Us to explore how fundamentally changed the characters were by their experiences, she was clearly more interested in thinking about what might remain constant. Given this, I’m not quite sure why I picked up her second novel, Greatest Hits, but I’m so glad I did. Free from the restrictions of finding a smart hook for her story, Barnett’s talents as a storyteller really shine through. I found it a completely immersive read; the five hundred pages flew by.

Cass Wheeler is a well-known singer-songwriter in the vein of Sandy Denny or Joni Mitchell, her career kicking off in the 1970s with her first solo album, The State She’s In. Now, in 2015, having not released any music for ten years, she’s been tasked with choosing sixteen of her songs to appear on a Greatest Hits album, which she’s decided to do on a single day before having a celebratory party in the evening. This acts as a framing device for Cass’s narrative of her life as a whole, and thankfully, after the very early chapters, it isn’t too intrusive. I liked the fact that Barnett was able to jump back and forward in time throughout the novel, but frankly, Greatest Hits doesn’t need a narrative crutch of this kind. Cass’s life story is simply and beautifully told, and entirely gripping in its own right. Barnett’s clear writing somehow manages to breathe new life into the most familiar of themes, such as Cass’s awkward childhood and distant, unhappy mother. I liked Greatest Hits even more, however, from Cass’s late twenties onwards. So many novels think about teenagers running away from home who achieve early success in the field of their choice, but fewer devote as much time to the struggles of middle age.

One of the strengths of The Versions of Us was the attention Barnett paid to the full arcs of Eva and Jim’s lives, rather than foregrounding their youthful romance, and she does the same thing in Greatest Hits. I especially liked the scene where thirty-eight year old Cass is recording a song with a twenty-two year old rising star, Dinah McCombs. We’ve been primed by popular culture to expect catty competition between women in scenes such as this one, but Cass has only empathy for Dinah: ‘Standing in the vocal-booth in the New York studio, she looked across at the younger woman – so lithe and smooth-skinned, so filled with the expectation of imminent success – and felt a maternal stirring of fear for her, and the hope that she would not make the same mistakes Cass had made. But of course, she reminded herself, Dinah would make them – or she would find others of her own.’ (I’m a bit younger than Cass is in this scene, but this is how I feel towards some of my female undergraduates – although they will no doubt feel immensely and justifiably patronised if any of them read this, as most of them are much more sorted than I was at their age!)

Greatest Hits is a genuinely absorbing novel, definitely one to sink into over long summer evenings. Furthermore, it’s being released alongside an album by Kathryn Williams, produced in collaboration with Barnett, that features the songs that appear in the book – so that’s something else to look forward to.

I received a free proof copy of Greatest Hits to review. It will be released in the UK on 15th June.