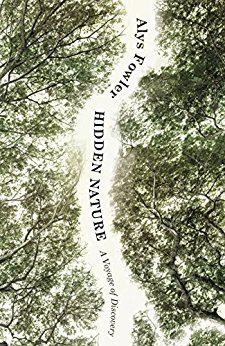 ‘The best maps are not published, are not accurate or even sensible, but are the maps we make ourselves about our cities… Here’s the corner I realised I was in love, there I was happy, here I lost my bike, and over there, I caught the scent of an ex-lover, then had to sit down and cry.’

Alys Fowler’s beautiful Hidden Nature starts with a familiar kind of nature-writing goal: she plans to paddle all the canals of Birmingham in her bright red pack raft. Rather than seeking out wild spaces, like the Hebridean island she visits later in the narrative, she wants to see what she can find near to where she lives. Fowler is known for her work on gardening, a subject I know nothing about, and so I wondered if I would find her paragraphs on plants a little too complicated and technical. As it turns out, Fowler can effortlessly take a topic you had no idea that you were interested in, like feral pigeons, moss or water-lilies, and make it fascinating. Here she is on the migration of eels: ‘The glass eels are known to climb out of the water and will flatten themselves to look like a blade of grass to hide from herons, who pluck them out of the water for tea. Weirs and flood barriers pose a threat to glass eels… The Thames now has a number of eel passes, bristled brushes that allow the eels to climb out of the water and wriggle along to the next stage.‘

As Fowler traces out her routes in green on an old map of Birmingham, she happens upon canals that have been closed or abandoned, or which are rarely open to the public. Her journeys through the subterranean tunnels she can access are rather creepy. The Dudley Trust allows her access to the Dudley Tunnel, a two-mile long tunnel with no towpath where bargees would have had to push thirty tons of boat through by pressing their feet against the roof. ‘It felt utterly otherworldly,’ Fowler writes, ‘as if we were travelling along the Styx.’ The tunnel is full of ‘white… black, blue and sulphur yellow’ limestone deposits, and fragile straw stalactites. In a more accessible tunnel, the Brandwood Tunnel [above], ‘great stretches glowed with a muted Parma violet pearlescence… the violet hue began to turn green’. In her little boat, she can travel around the city in a way that was closed to her before, even venturing into places that might be dangerous for a lone woman at night, but where she is safe in the middle of the water.

But Hidden Nature is not simply another work of nature-writing. Interspersed with this wonderful work on the canal network are fragments of another story; how Fowler uprooted the life she knew when she realised that she was a lesbian. Although the catalyst for this upset was falling in love with another woman, Fowler is clear that this was only a catalyst; that her own hidden nature was always present, that she had always felt that there was a ‘rage’ inside her that wouldn’t be satisfied until she was honest with herself. She writes incredibly well about the guilt of leaving her chronically ill husband, the frustration with herself as she wonders why she hadn’t realised sooner, and the fear of claiming a new identity. ‘I felt too queer for my straight world and too straight for a queer one.’  Coming out later in life (Fowler is only 37, so I don’t feel her phrase ‘late in life’ is really appropriate!) is rarely dealt with by fiction or non-fiction, which tends to focus on the experiences of teenagers or very young adults, despite the fact that this is a story that many women share.

‘In a world where we’re asked to make bold, assured statements about ourselves, admitting halfway through that I’d been on the wrong track was a mighty strange thing,’ writes Fowler, but she also makes it clear why she had to do this: ‘I don’t think coming out brings happiness. I know it can result in a lot of sadness. It isn’t a guarantee of anything other than perhaps not letting yourself down.’ But how much is that worth? As Fowler puts it, ‘What coming out brought me, though, was a peace I hadn’t known you could possess… It’s worth it all.’ Hidden Nature jumps between Fowler’s careful descriptions of nature and these intense, painful passages on her inner struggle, and for that reason, some readers might find it disjointed. However, this didn’t bother me at all; the structure seemed to mirror Fowler’s own thought processes, in that she could only dwell on what she had done for so long at a time, and also gave respite to the reader, allowing them to understand her unhappiness without being overwhelmed by it. At times, a particular paragraph will seem to bring her internal journey to a close, then the next time she returns to the subject, there is more to say. This seems to me to reflect perfectly how we navigate such big life changes. As Fowler puts it herself, after one afternoon of ‘howling’, she didn’t ‘expect more tumbling’, but: ‘I didn’t know that you often have to unravel completely before you can start to work your yarn back into something solid to carry on.’ Hidden Nature matches the prose of such nature-writing stars as Kathleen Jamie, but its true narrative is this process of unknitting.

I received a free proof copy of this book to review. It’s out on 6th April.