I’m currently venturing further into science fiction than I have done previously, but am still pretty new to the genre… Here’s some of the things I’ve been trying recently – all of them have a YA-ish bent. 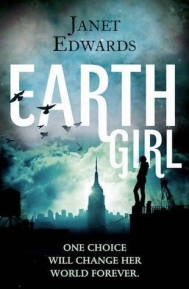 I’m a little puzzled that this YA novel was published. Not because it’s outrageously bad, but because it reads very much as a first draft, dramatically uneven, but full of interesting ideas. Ronan Wills has already analysed the problems with the novel’s opening and central concept on his blog, so I’ll try to avoid covering the same ground. Eighteen-year-old Jarra is one of the Handicapped, a small segment of the population whose immune systems are so weak they can never leave Earth, in a time when most of humanity lives ‘off-world’, travelling through space via a portal system. Jarra hides her disability by posing as a ‘norm’ in her first year of university, as she joins a group of students undertaking archaeological digs on Earth. Jarra was a really frustrating heroine; she had so much potential and, as she is forced to reassess peers whom she misjudged, you can tell the author’s heart was in the right place, but she’s ultimately just another piece of wish-fulfilment. Brilliant at everything, she never seems to be at any real risk, and she’s another protagonist who has no actual goal, unless you count demonstrating that she is as good as the norms, which she accomplishes in the first few chapters. However, the real problem with Earth Girl is the pacing; key moments are covered in a couple of pages, while Jarra seems to risk her life on an endless number of digs that are all essentially the same. The loose ends are also tied up so tightly that I’ve no idea how there can be two more books. I assumed from an early reference in this novel that Jarra was going to encounter aliens, but apparently they don’t turn up until the sequel, which seems a very odd moment for them to suddenly appear. Anyway, it’s a shame that this wasn’t revised further before publication, because it certainly had potential. 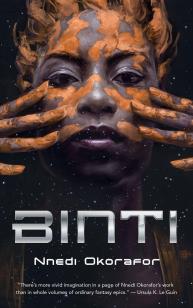 This YA novella also began with such promise but left me severely disappointed. Its heroine, Binti, begins a journey in the far future to Oomza University, the first of her people, the Himba, to attend. Having experienced racist oppression all her life from the ruling people of the Earth, the Khoush, Binti expects little different from her interstellar journey, despite her extraordinary talents in mathematics. However, when the spaceship she is travelling on is attacked by a menacing alien race, the Meduse, Binti has a new threat to face. The opening pages of this novella offer a refreshing take on the traditional European/American-centric sci-fi set-up, as Binti packs her otjize and explains the braiding of her hair. I also loved the way in which she travels: ‘The ship was a magnificent piece of living technology. Third Fish was a Miri 12… Miri 12s were stable calm creatures with natural exoskeletons that could withstand the harshness of space. They were genetically enhanced to grow three breathing chambers inside their bodies.’ The conflict Binti experiences between the norms of her people and her own ambitions also has potential, especially in her attitude towards the otjize that she wears – she values and respects it, but also remembers feeling great freedom when she once washed it all off as a younger girl.

Unfortunately, Binti soon founders under the weight of its own narrative. There’s simply not enough space for Okorafor to develop the story that she wants to tell, and once Binti departs on Third Fish, emotional resonance is sacrificed for a sketchy plot. Binti tells us that she makes non-Himba friends for the first time, but they are literally reduced to a list of names before being slaughtered by the Meduse. However, it’s during the conflict with the Meduse that Binti started reminding me of my least favourite episodes of Doctor Who. The Meduse kill everyone on Binti’s ship so they can retrieve a Meduse stinger from Oomza University, who possess it unlawfully. When Binti negotiates with the university on behalf of the Meduse, they not only return the stinger but agree to let one of the Meduse attend the university – seemingly forgetting all the innocent people that have died. This is a horribly reductive rendering of peacemaking that means the novel fails to explore the complexities of conflict and prejudice, despite its promising set-up. The Meduse may well have much longer-standing grudges against humankind, but the poor world-building means that we find out nothing about them. The awkward prose and Binti’s info-dumping, often characterless narration does little to help matters. Such a shame, as there was lots of promise here.

A Long Way to a Small, Angry Planet: Becky Chambers

Saving the best till last; I absolutely adored this. It’s a space adventure starring a diverse range of alien and human characters as they try to set up a tunnel to a far-off galaxy to facilitate trade with a distant civilisation. We see a lot of it through the eyes of new human recruit, Rosemary, who has a secret past, but the other characters who came vividly to life for me were Sissix, an alien mix of feathers and scales who pilots the ship, the quirky and tactless human engineer Kizzy, and Ashby, the long-suffering captain who has to manage all these very different personalities. A Long Way to a Small Angry Planet is infused with warmth, a delightful antidote to more ‘grimdark’ fiction; it may be unrealistically positive, but it was a delight to read about a future world that is, for once, closer to utopia than dystopia.

The novel is very episodic; although there is supposed to be a through-line about the crew’s tunnelling mission, in reality, this is only briefly mentioned, and provides very little conflict. Instead, each character takes their turn to encounter unexpected peril, generally linked to their backstories and to the worlds in which they’ve grown up. At its best, this structure produces fascinating set-pieces that are full of ideas and questions, such as a longer-running thread about Sissix’s species that culminates in a visit to her family. At its worst, it can feel a bit ‘Alien of the Day’, with drama artificially manufactured so Chambers can work through some of her concepts, like the grumpy algaeist Corbin’s backstory, or even the illness of the ‘Sianat’ pair, Ohan. Similarly, characterisation can be more complex – as with Rosemary, Sissix and Kizzy – or can be reduced to a single trait that relates to whatever issue the character has to face. Nevertheless, I’m still a big fan. The cheery brightness of the novel gives it a YA feel, but there’s more to chew on here than in most YA fiction. Chambers is an imaginative and thoughtful storyteller, and I can’t wait for the sequel, A Close and Common Orbit (October 2016).