I’m about halfway through 20 Books of Summer – I’ve read or am currently reading 10 of my 20 picks. Today, with some trepidation, I’m reviewing two novels that everybody else seems to have loved…

After Me Comes the Flood by Sarah Perry

John drives away from the bookshop he owns during a dry, heavy summer, coming to rest only when he arrives at an old house in the middle of a forest. The group of strangers there seem to be expecting him; rather than explaining their mistake, he finds himself drawn into their world, but at a loss to explain their mysterious connection. After Me Comes the Flood is not especially interested in giving the reader solid answers. Instead, Perry’s beautiful and precise writing creates a strong sense of atmosphere, which flares into especial distinction in certain scenes, such as when John swims in the reservoir near the house with one of his companions, a troubled young man called Alex, looking for house martins’ nests. ‘The waterline must once have been almost level with the grass embankment, but had receded in the drought and left a kind of rough beach littered with feathers and algae. All around us the dark pines of the forest stooped towards the water as if they were thirsty.’

While I admired the skilful execution of After Me Comes the Flood, I should have suspected that it wasn’t the sort of novel I was going to enjoy. Unfortunately, I have a limited amount of patience for novels that follow a symbolic or dreamlike logic, offering up tantalising threads to follow but not supplying solid answers at the end. I love speculative fiction but have less interest in stories that suggest something complicated is going on beneath the surface but don’t allow us to get at it. This sounds horribly prosaic, and I spent some time wondering why it was that After Me Comes the Flood didn’t work for me. My conclusions are provisional, but I think it boils down to two things; characters and ideas. In keeping with the mood of the novel, Perry’s characters tend to be deliberate ciphers, filling certain roles in the landscape of the house without ever blossoming into live. If we are to assume they represent some kind of psychodrama that John is working through, this makes sense, but then John himself is humdrum, deliberately ordinary, and very unengaging. For me, he wasn’t the root to which I could cling as I navigated the shifting sands of the rest of the book, even if he was supposed to be.

All of this could have been overcome if After Me Comes the Flood had seemed to be exploring interesting ideas. But this is not a novel of ideas, nor is it meant to be. It picks up on important themes of emotional fragility and mental health, but for me these topics weren’t a strong enough thread to hold the pieces together, especially when, as I’ve said, the characters themselves felt sketchy. I’m still keen to read Perry’s second novel, The Essex Serpent – she’s clearly a wonderful prose writer and it sounds like a very different kind of book – but this wasn’t one for me. 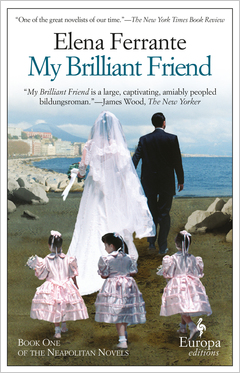 My Brilliant Friend by Elena Ferrante

So many bloggers and friends have pressed these novels upon me that I was pretty apprehensive about reading the first in the quartet in case I committed the heresy of not liking it. To my relief, I liked it very much indeed. It’s always odd to read and review a novel that has already attracted such positive critical attention – I can never quite embrace such books with the enthusiasm that I have for things I’ve discovered by myself, but My Brilliant Friend certainly deserves its accolades. It’s also difficult to think of anything new to say about Ferrante’s writing (and the wonderful translation by Ann Goldstein) that hasn’t already been said, especially as I’m disadvantaged by having not read the rest of the quartet – and I won’t be able to get to the next three until I finish my 20 Books of Summer list! But there were a few thoughts that came to me while reading.

For those who haven’t yet encountered My Brilliant Friend, it traces the childhood and adolescence of Elena and Lila, two girls growing up in a poor neighbourhood in Naples. Their lives are often closely intertwined, but they are not always side by side. Indeed, a major split in their life courses occurs early in the novel when Lila’s parents refuse to pay for their daughter to go to middle school, whereas Elena goes on to the next stage of her schooling and finally to high school. Lila is such a presence in the novel because, despite the fact that Elena is our narrator, she is telling us Lila’s story, even when it does not intersect neatly with her own. Ferrante brings every person in the girls’ close-knit world vividly to life, but it was Elena’s forensic analysis of Lila that made the novel stand out for me. It’s rare to find a modern novelist who takes character so seriously – something which even the lesser nineteenth-century English novelists try to do, but which seems to be missing from a fair chunk of literary fiction these days.

Elena’s observations of her friend over the ten or so years which this novel covers are absolutely fascinating. To Elena, Lila is special – she stands apart from the others around her and always has done – and her recording of her complexities proves Lila’s brilliance. However, although Lila is undoubtedly exceptionally bright and unusually independent, the very skill of this novel is reminding us that she is in many ways an ordinary girl, not distinguished especially from those around her, with her limited education and her early courtships. How far can we disentangle Elena’s perception of Lila from the reality of her life? Would the other people that she has grown up with become equally contradictory and multi-faceted if viewed under this lense? My Brilliant Friend acknowledges, as few novels do, how much more there is to us than we can ever catch, and gives us a glimpse of what lies beneath the surface.

3 thoughts on “Swimming against the tide”