Over the next two days, I’m going to blog about the Baileys Prize shortlist before the prize ceremony on Wednesday. Tomorrow, I’ll be reviewing Cynthia Bond’s Ruby, and  I’ll also publish my ranking of the four books on the shortlist I’ve read.

I was sold Lisa McInerney’s The Glorious Heresies on the promise that it featured a realistic teenager (one of my previous rants on the subject of many writers’ inability to write teenagers can be found here) and this promise was absolutely fulfilled. McInerney treads especially dangerous ground with Ryan, the beating heart of her marvellous Cork-set novel, because he seems to fit into so many ‘juvenile delinquent’ stereotypes. Expelled from school for dealing drugs, he presses forward with his career choice without regrets, and is soon becoming involved in the same kind of murky underworld dealings in which his father, Tony, is a reluctant participant. His beautiful and ambitious girlfriend, Karine, is the one anomaly in an otherwise familiar trajectory, and he believes he has already cheated on her. Nevertheless, McInerney never allows Ryan to become a case study or a symbol. He’s a person whom we care about from the first page, when he leaves ‘the boy’ in himself ‘outside its own front door… a pile of mangled, skinny limbs’. Even more importantly, Ryan doesn’t become what I sometimes call a ‘sympathy drain’; a character who is so likeable that he sucks in the reader’s ability to relate to any of the other characters in the novel.

The cast of The Glorious Heresies is hardly full of nice people, and yet McInerney refrains from writing any of the major characters as irreedemable, which, ironically, only throws their transgressions into sharper relief. Tony is a perfect example. If he had been written as a total brute, he would focus as a plot mechanism rather than as a character; an obstacle in Ryan’s way. Because McInerney nails his cowardice, his weakness, his awareness of all these things so perfectly, he becomes someone who we respond to with realistic anger, rather than a black-hearted villain. Character is absolutely the strength of this novel, but McInerney’s fantastic prose is also worth mentioning. When ex-drug addict and ex-prostitute Georgie looks out over Cork in the morning, we see the city through her eyes:  ‘The air was cold, stripped of the fragments it had picked up the day before, though it would be stale by midday and offering mouthfuls of flies by dusk… Back in the city there was traffic and torment from dawn. Out here, so long as the air held that chill, the limbo between then and now stretched as far as she needed.’ If I hadn’t fallen in love with A Little Life so absolutely, this would definitely be my pick for the Baileys Prize. 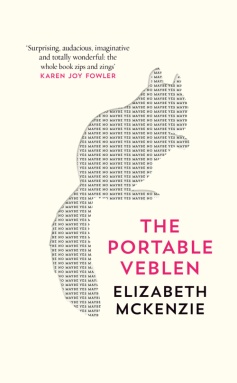 At the other end of the spectrum is Elizabeth McKenzie’s The Portable Veblen. I rarely read a novel that leaves me so baffled. In the interests of full disclosure, I’ll admit that I gave up on The Portable Veblen a third of the way through, so perhaps it all makes sense later on. But the ingredients weren’t looking promising. McKenzie seems to be writing a quirky, surreal novel that has nothing really quirky or surreal about it, stalker squirrels notwithstanding. We’re introduced to Veblen, an all-too-familiar thirty-year-old woman who is drifting through life doing freelance translation, has a difficult family and may have just agreed to marry a man who she doesn’t love. She’s distinguished by her unusual name and her unrealistic dialogue (“This morning it came to the window – I think it wants to befriend me,” Veblen said, quite naturally). Paul, Veblen’s fiancee, has just entered a mysterious deal with a pharmaceutical company to produce a ‘pneumatic turbo skull punch’ for the battlefield; these sections of the novel were rather more interesting, as they seemed to be warming up towards something like the bizarre social satire favoured by George Saunders, but still didn’t seem original enough to persuade me to carry on. There just seemed to be so little going for The Portable Veblen – dull prose, familiar characters and too much weirdness for weirdness’s sake – that I decided life was too short. But I’m willing to be proved wrong.

10 thoughts on “Glorious and portable”