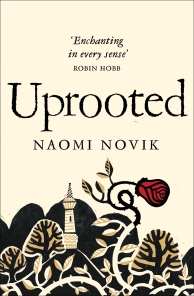 The back cover copy for Uprooted is, very unusually, a beautiful piece of prose in its own right:

Agnieszka loves her village, set deep in a peaceful valley. But the nearby enchanted forest casts a shadow over her home. Many have been lost to the Wood and none return unchanged. The villagers depend on an ageless wizard, the Dragon, to protect them from the forest’s dark magic. However, his help comes at a terrible price. One young village woman must serve him for ten years, leaving all they value behind.

Agnieszka fears her dearest friend Kasia will be picked at the next choosing, for she’s everything Agnieszka is not – beautiful, graceful and brave. Yet when the Dragon comes, it’s not Kasia he takes.

The cadence and cleverness of that last sentence! However, although it certainly did its job in selling the book to me, it is – as this review from Tor also suggests – rather misleading. It suggests, in short, a much straighter retelling of Beauty and the Beast than we actually get, and – having been brought up on Robin McKinley’s beautiful retellings – I found myself a little disappointed when I realised the plot was not going in that direction. (And in response to that review, Beauty and the Beast retellings do not have to depict abusive relationships – end of.) Nevertheless, Uprooted brings a lot to the table. Its most distinctive feature is its antagonist, the Wood. Naomi Novik handles the threat posed by the semi-sentient and semi-mobile Wood perfectly, creating a genuinely terrifying adversary for Agnieszka and her allies. Let’s take just one example of this shiver-inducing prose. Early in the novel, an unfortunate village girl is captured by the Wood, and although Agnieszka manages to rescue her, she realises that the Wood is still inside her:

‘Where [the light] played over her I saw thick green shadows, mottled like layers of leaves on leaves. Something looked at me out of her eyes, its face still and strange and inhuman. I recognised it; what looked out at me was the same thing I had felt in the wood, trying to find me.’

Frightening stuff! Novik continues to develop the powers of the Wood throughout the novel, so it never becomes too familiar, and hence continues to unsettle the reader.The reason for its corruption and malice is well seeded and provides a satisfying twist at the end.

Nevertheless, although I enjoyed Uprooted immensely, I found myself wishing that Novik could have given her readers more breathing space; that the relative quietness of the opening chapters could have been returned to occasionally throughout the story. The pace of the novel is simply relentless. Things happen, happen, happen and keep on happening. Novik is a strong enough writer to manage these threads, and we never feel as if our protagonists are being diverted onto pointless side quests, but that each new event, if initially surprising, feeds into the broader story that is developing. But personally, I would have appreciated more breaks to take in some of the beauty and eeriness of the world that Novik has created, especially as there is no chance of the tension letting up when the Wood is looming over everything. Indeed, a moment of stillness when Agnieszka feels helpless before it and there isn’t anything that she can do might have made it even scarier.

This, of course, is partly a personal preference, and there’s no point in castigating a novel for not being something that it never intended to be. But I felt that the characterisation suffered in consequence. Uprooted has been praised for its complex depiction of relationships, especially those between women, and it’s definitely refreshing, in a modern fantasy such as this one, to see women working together rather than being pitched against each other. However, there simply isn’t enough time given in the novel to Agnieszka’s relationship with Kasia for us to get much sense of it as a specific friendship, rather than the generic idea that the two women care very deeply about each other. It’s a shame, as Novik clearly has the ability to have done something more interesting here. Similarly, while I liked Agnieszka herself, the initial subtleties of her characterisation were sacrificed to the need to have her continually be active, and to the rather overwhelming power of her magic. Agnieszka’s talents rather irritated me, unfortunately – I felt they could either be read as her being immensely more powerful than everyone around her, even those who had been training for decades, which is not a trope I like at all, or as her ‘female’, natural power being complementary to the more ‘male’, academic power of the Dragon, which is obviously problematic. This all sounds rather negative, but these things stood out to me because Uprooted is otherwise so good, so I was less prepared to see it fall into these stereotypes.

Uprooted is engrossing and gripping, and Novik’s Wood feels like a genuine piece of folktale – something that many writers aim for, but few manage. I certainly recommend it – but don’t expect to have much time for reflection.

3 thoughts on “The dragon and the witch”