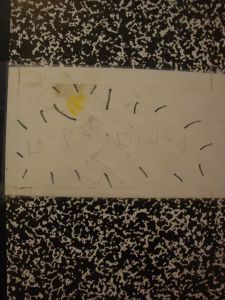 A diary I kept at a very early age.

Who knew that anyone’s teenage diary would provide so much material for present-day entertainment? Because teenage diaries are certainly in fashion at the moment. There are numerous articles in national newspapers, and similar programmes on the radio, where notable people wallow in the horror of their teenage diaries (the continuing success of the various incarnations of Rae Earl’s My Mad Fat Teenage Diary may have something to do with this). You can even attend events where people read their teenage diaries aloud; Oh Dear Diary ran recently in Manchester and Birmingham, while Diary Days was a London equivalent. The draw? Teenage diaries are funny. Oh Dear Diary is ‘the cringeworthy comedy night where readers bare their teenage souls’ with ‘large doses of teen angst and strops aplenty’, while Stylist made much of the fact that most colleagues immediately refused to share extracts from their own diaries, but that they finally found ’10 for you to enjoy. Expect plenty of exclamation marks. Names have been changed to avoid embarrassment.’ Lucy Caldwell in the Guardian could find only one surviving diary: ‘But one is more than enough as a reminder of those gruesome years.’

While I certainly don’t want to criticise any individual diarist for choosing to share their teenage memories in this way – I’m a little bit addicted to If Destroyed Still True, Tess Simpson’s teenage diary blog – as a trend, I find this somewhat disturbing. Most importantly, what is it saying to today’s teenagers if we present adolescence as something that can only be viewed with total hilarity or complete despair? Rather than accepting that teenage lives are often as mixed, complex and varied as adult lives, and that teenagers can have serious problems that cannot be laughed away, such a narrow focus on how to re-read the teenage diary makes teenagers, both past and present, into caricatures.

Luckily I kept a diary from the age of 13 to 18, and can hence conclusively demonstrate that I was a ray of sunshine, totally understanding of the feelings of everyone around me and troubled only by the important issues in life, such as world peace…

Obviously, that wasn’t the case. But I am going to use my own teenage diaries (that being the only good source material I have to hand) in this series of blogposts to demonstrate that while teenagers, like adults, are often selfish, irritating and unintentionally funny, they are not only these things, all the time. My diaries are definitely not works of great introspection, especially in my early years, and as I discussed in my post on children’s diaries, I adopted a self-conscious ‘diary style’, so they are in no sense the unalloyed truth about what I was feeling. But when I re-read them, while I often laughed, I also remembered the full range of emotions I felt as a teenager; it was unexpectedly and surprisingly immersive. Far from being distanced from my teenage self, she felt more real to me than ever.

Over this series of posts, which will run on Mondays, I’ll take a couple of entries from my diaries for each year of my teens, stopping at eighteen (I’m not going to touch the university years… too close to home!). I will change all names and identifying details, and remove anything that is too easily identifiable. I will also correct all my spelling.

So, without further ado… 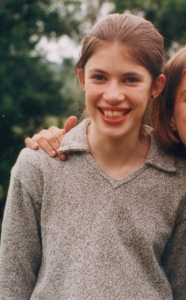 Today I felt like crying. After all, who stood by Sarah when she got stressed out and moody and everyone else turned against her? Who listened to her problems, all the time? Me. We’ve been best friends for most of Year 8 now, and I’ve never let her down. I don’t think I’ve smothered her either – we’ve both got other friends, like Hayley, Louise, Rosie, Maddy. But now she says that me and Maddy are ‘both her first best friends’. I thought I was your best friend! I thought I was the only one! I wanted to shout. She says she’s been best friends with both of us since Year 7. But that isn’t true. For a while, she was my best friend only. I was so lucky then.

I know what it is. Ever since the Culverhay [local all boys’ comprehensive] disco on Friday, when they both found boyfriends. Some boyfriends if you ask me – they hardly know them! But now they’re all secretive, wanting to talk privately about boys. I don’t like the boys at Culverhay – most of them are really ugly. But it would be nice if someone had asked me out too, even though I would have said no.

A long time ago. The Christmas before last. There were three friends and they were so happy. But a girl called Maddy Jones broke everything up. She took my place with Allie and Stephanie, only to break up with them.

In some ways, Allie and Stephanie were the best friends I’ve ever had. They didn’t see me as a charity case, unpopular, uncool. I was just normal. I want to be normal. And I could talk to Stephanie about anything. Do you remember, Stephanie? I want to ask her. What went wrong?

For the worst time, I was alone. Then I made friends with Maddy and Sarah. Then Hayley joined our group. Then Rosie. I won’t let Maddy break us all up again. I’m tired of her games. Maybe it’s her turn to have a taste of what it’s like to be out in the cold.

This entry probably epitomises the sort of thing I would read out at a comedy event, if I was so inclined. The melodramatic style – inherited from such great literature as Sweet Valley High – is just so ridiculous. Nevertheless, this brought vividly back the complicated tangle of female friendships at my all-girls’ comprehensive school, and the quasi-romantic language – ‘break us all up’ – that the other girls and I used to describe them. The incident that has upset me is clearly very minor, but because it ties into a history that I partially explain in the diary entry, it’s sent me into a spiral of misery and fear. There was a period during my first year at secondary school when I had no friends at all. I was deeply unhappy, and I essentially spent the next six years doing anything to ensure that this would never happen again. So although this entry does make me laugh – I feel especially sorry for the poor Culverhay boys, whom I’m rejecting en masse because really I believed that none of them would ever fancy me – it also reminds me of how insecure and frightened I felt a lot of the time in my first few years at secondary school. To be honest, I would not want to have to attend school nowadays and so I don’t see my worries as necessarily disproportionate to the situation I found myself in – just very badly expressed!