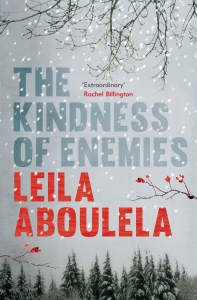 Natasha Wilson is a lecturer at an unnamed Scottish university, researching the life of Imam Shamil, who led the Muslims of the Caucasus in resistance against the Russians in the mid-nineteenth century. Shamil framed his war in the language of jihad, but, as Natasha puts it near the end of the novel, describing her most recent conference paper, ‘I wanted to compare Shamil’s defeat and surrender, how he made peace with his enemies, with modern-day Islamic terrorism which promoted suicide bombings instead of accepting in Shamil’s words “that martyrdom is Allah’s prerogative to bestow.” How did this historical change in the very definition of jihad come about?’ Natasha herself feels isolated by her stigmatised identity; half-Russian, half-Sudanese, she changed her surname from Hussein to Wilson after her experience of arriving in London as a fourteen-year-old in 1990, ‘just as Saddam Hussein invaded Kuwait. Imagine an unfamiliar school, a teacher saying to the class “We have a new student from Sudan. Her name is Natasha Hussein.”‘ Natasha has always perceived herself as trapped between cultures, not really belonging anywhere: ‘The two sides of me… were slammed together against their will… refused to mix. I was a failed hybrid, made up of unalloyed selves.’

Natasha’s sense of displacement mirrors most closely not Shamil’s own story but the lives of two other crucial figures in his struggle; Anna Chavchavadze, a Georgian princess married to the Russian prince David Chavchavadze, who was abducted by Shamil’s men in 1854, and Shamil’s son, Jamaleldin, who had been given as hostage to the Russians in 1839. Shamil would ultimately orchestrate the exchange of Anna and her small son for Jamaleldin in 1855. Jamaleldin, who grows to adulthood in Russia, acquires a taste for Russian culture and courtly lifestyle, and struggles to cope when he reluctantly returns to his father: ‘It was strange not to listen to Chopin, not to visit the theatre or dance in a ball; not even to play billiards or dominos or cards.’ Anna, although much gladder to leave her captivity, also feels disorientated when she returns, missing the company of Shamil’s wives and his recognition that she is ‘a princess in her own right’; not a Russian, but a Georgian. These historical sections of the novel are by far the most immersive, with all three protagonists swiftly earning the reader’s sympathy.

In contrast, Natasha is difficult to like; and I think we are meant to like her. Early in The Kindness of Enemies, Natasha’s friend’s son, and Natasha’s own undergraduate student, Oz, a Muslim, is accused of planning terrorist acts. Natasha happens to be at her friend’s house when the police come for Oz, and her own computer is seized as well. Her reaction is to distance herself as quickly as possible; she immediately drives away, thinking, ‘save your skin.’ Natasha is sharply aware of her position as an outsider in the world of academia, and so her need for self-preservation makes sense; but she also deserts her friend in her time of need. Later, we learn that Natasha volunteered herself to write reports on students ‘in danger of radicalisation’, believing that this is the quickest way to emphasise that she is not really a Muslim, despite her heritage, not like them. Again, this makes absolute sense as a response, but this, alongside Natasha’s generally grim attitude towards her undergraduates (she laughs mockingly and publicly at one Muslim girl who asks if she too is a Muslim, and seems to revel in the ‘stupidity’ of another student), made me feel even less kindly towards her. More importantly, however, by the end of the novel, it seems we are meant to believe that Natasha is now embracing, rather than rejecting, her heritage; and yet, in the very last pages, she is still focused on the fact that ‘the anti-terrorist squad searched my office after Oz’s arrest… I might as well have stayed Natasha Hussein!’ Natasha’s fury here is justified and understandable; what is alienating is the total lack of support she offers to Oz or his mother, and her seeming inability to realise that, although what has happened to her (which amounts to little more; she retains an esteemed position in her university) is unfair, what has happened to Oz is far worse. We are told that she sent messages to his mother, but we are never actually shown that she truly cares.

These difficulties in Natasha’s characterisation, which is largely told, rather than shown, point to a larger problem with the novel. Although solid and well-researched (these little-known historical incidents around the time of the Crimean War are absolutely fascinating) most of it never really came to life for me. We move from the Caucasus to Russia to Scotland to Khartoum, and yet Aboulela’s writing consistently lacks precise detail, the strong sense of place that such an itinerant story requires. In Khartoum, for example: ‘The pavements were narrow and broken and sometimes there were no pavements at all. Toyota pickups zoomed past me. Motorcycles, vans and more four-wheeled drives. Tea ladies sitting in a row… Rubbish piled on the side of a street; broken chairs stacked on top of each other. Too much struck me as incongruous. A donkey stood in the middle of a dusty street.’ To me, this conjured up any number of cities and places; I’ve never been to Khartoum, and there was nothing in this that took me there. More broadly, Aboulela has a habit of spelling out the messages of her novel, as some of the quotations in the first paragraph of this review demonstrate; we are never allowed to forget that this is a novel about people who don’t fit in trying to figure out where they belong, or (to pick up on the sub-theme about Oz that is oddly dropped in the middle) a novel about the changing meanings of what it means to be Muslim, and what it means to fight a holy war. In the end, The Kindness of Enemies simply isn’t very well-written; which is a shame, because the subject-matter alone kept me reading.