To my distress, I couldn’t find an image of the edition I have, and it is in storage so I couldn’t photograph it. I’ve picked my favourite of the modern Katy covers instead, and one of the few that doesn’t make Katy look much younger than she is.

What Katy Did (1879) would be easy to write off as a hopelessly old-fashioned and didactic nineteenth-century children’s novel if you had only heard the basic plot outline. Twelve-year-old Katy Carr is the oldest of a large family of children, expected to take on responsibility for her younger siblings, especially as her mother is dead. However, Katy is naturally exuberant and imaginative, and can’t help getting into ‘scrapes’, as the book would put it. When she tries out the children’s new swing before it is ready, her rashness has disastrous consequences. She injures her back and is told that, if she is to hope to recover, she will have to endure a long period of pain and boredom, confined to her room and largely isolated from the rest of the household. Fortunately, saintly Cousin Helen, who is herself an ‘invalid’, is available to guide Katy through her troubles. Helen emphasises the lessons that Katy can learn from her suffering, and how she can still remain involved in her family’s life if she makes her sickroom the centre of the house, and encourages her siblings to come to her with their troubles. After several years of illness, Katy is rewarded by regaining the use of her legs, and has become the more responsible, serene adult that she always wanted to be. 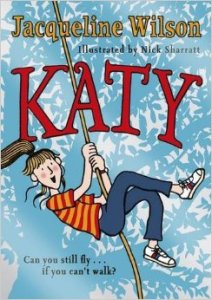 It’s unsurprising that when Jacqueline Wilson decided to rewrite her own version of What Katy Did – also one of her favourite children’s novels – that she chose to remove some of the most obviously damaging messages in this basic story. The Telegraph is already panicking about the ‘rewriting’ of children’s classics: ‘If you don’t start reading outside your comfort zone when you’re young and adaptable, when will you?… This is how you end up with a generation of people that can only read books with ‘”characters they can totally relate to'”‘. While I completely agree that classics like What Katy Did should still be read by children, I find it hard to see how Wilson’s book will prevent this from happening. If anything, it will surely introduce the novel to readers who would otherwise never have found it, as the article itself recognises. And far from being motivated by the idea that young readers won’t understand What Katy Did, Wilson seems to be, rightly, afraid that they will understand it all too well:

I found Helen rather too preachy and saintly, especially when she started talking about “God’s School of Pain.” I remember even as a child thinking it was horribly unfair that you were supposed to change your whole personality and become positively angelic if you became an invalid… I thought of all the real children in wheelchairs reading these books, wondering why religion and fresh air weren’t working miracles for them too. (The Guardian, 31st July)

Accordingly, in Wilson’s version of the story, Helen, a friend of the family who uses a wheelchair because of rheumatoid arthritis, becomes a mentor to Katy, but encourages her to fight for what she wants, rather than to passively endure. Katy knows by the end of Katy that she won’t be able to walk again, but she has managed to get a place at the secondary school that she wanted to attend, despite official objections, and is dreaming of becoming a Paralympic athlete. (I’m afraid I found New Helen as saintly as the original Cousin Helen – but the intentions are certainly in the right place!)

The repackaged version indicates that the publishers are, in fact, aiming to get children to read both books, not just Wilson’s.

Perhaps the Telegraph’s fears might better be rephrased as the concern that, because Katy is clearly a much better book about dealing with disability, What Katy Did will simply be superseded. But What Katy Did is not simply a lesser version of its modern retelling. It, too, accomplishes things that its counterpart cannot. Firstly, its overtly ‘saintly’ message becomes something rather more complex in the telling. Katy’s accident is framed by her father, Dr Carr, as a result of disobedience; she was told not to use the new swing, and, if she had done what she was told, she would never have been injured. However, our omniscient narrator gives us a rather different picture that plays against Dr Carr’s worldview. When Aunt Izzie, who takes care of the Carr children, tells Katy that she is not to use the swing, she refuses to give a reason. The narrator explains:

‘This was unwise of Aunt Izzie. She would better have explained further. The truth was, that Alexander, in putting up the swing, had cracked one of the staples which fastened it to the roof… If she had told this to the children, all would have been right; but Aunt Izzie’s theory was, that young people must obey their elders without explanation.’

This aside, with its undercutting of the virtues of mindless obedience, gives us a glimpse into the tensions beneath the surface of the outwardly moralistic What Katy Did. The sheer joy with which Katy’s exploits in the first half of the novel are described indicates that Coolidge is in complete sympathy with her heroine, and although Katy schools herself in virtue after her accident, this section still feels powerful and resonant to a modern audience, despite some unpleasant messages about the need for women always to appear gentle and pretty. Engaging with the experience of chronic pain, it covers even more unusual material for a children’s book than Katy, which goes pretty far in its depiction of the realities of spinal injury. And while Katy tries to conform to a nineteenth-century template of the female invalid, Coolidge is realistic about the difficulties she faces, and, in not leaving her in her saintly sickbed, also emphasises the importance of an active life. In the very tensions between what Katy is told and how she really is, What Katy Did does interesting work that is not present in Wilson’s retelling, even if some of this work is unintentional. And I think that some of these themes made the novel attractive to me as a child, though I read it more than a hundred years after it was written.

One thought on “What Katy Did… Again”