This is Part One of a three-part series I am writing based on my own experience of academic interviews, as a follow-up to this post. I am a modern British historian, but I will aim to make these posts relevant to academics from humanities and social science disciplines more generally.

Junior Research Fellowships – which are usually three-year full-time research posts at one of the Oxford or Cambridge colleges – are rightly perceived as largely an insiders’ market for Oxford and Cambridge graduate students, although I do know some JRFs who have never attended Oxford or Cambridge. Hence, I apologise for the inevitably limited audience for this post – next Monday’s post will cover academic interviews more generally, and will hopefully be more useful. However, I thought it was worth writing a specific post for JRFs because JRF interviews are so different from other academic interviews, and because there is very little advice currently available online about them, except on the password-protected Cambridge Careers Service site. If you’re a Cambridge student or graduate, definitely check out the JRF articles and podcasts, they are extremely useful – but if you’re not, this sort of thing only reinforces the Oxbridge bias for this type of position.

All JRFs have their own slightly different application procedures, but you will usually need to submit a research proposal ranging in length from 500 to 2000 words, or 1 to 3 pages, depending on the requirements of the post. I won’t be writing about this aspect of the application process in detail, as I’ve seen few research proposals specifically aimed at JRFs and I’m not sure I have any especially helpful advice to give. Broadly speaking, you should make sure your proposal is accessible to an academic in any discipline, as JRFs are often open to a range of disciplines (although they are usually split into arts/humanities/social sciences versus the sciences). This is generally good advice anyway, in my experience; when I applied for history-specific JRFs, I kept the same proposal, as the historians reading your proposal are unlikely to be specialists in your field and may still struggle to engage with your research if you assume too much knowledge.

So, what happens if you are fortunate enough to be invited for a JRF interview? 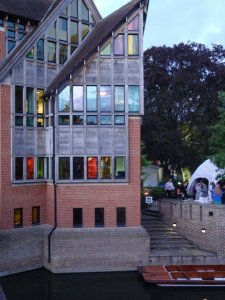 To be open about my own experience of JRF interviews: I have had four such interviews, none of which were successful. I had two interviews last academic year (2013-14) and two this academic year (2014-15). Three of my interviews were at Oxford colleges, one at a Cambridge college. In addition, I have been longlisted for two JRFs at Oxford in the last two years, but then rejected at that stage. Although I’ve never held a JRF, I received very positive feedback from all my interviews except the first (which was my very first academic job interview ever, so I was terrified and performed very badly!) So hopefully I haven’t been approaching them totally the wrong way, but I would still like to emphasise that this advice is drawn entirely from my own experience, and may not reflect the experiences of other JRF interviewees. A particular problem with JRF interviews is that they will vary wildly depending on the college concerned and the personalities on the interview panel, so there will never be a ‘one size fits all’ guide to these interviews. Having said that…

This is probably the most important thing to keep in mind when preparing for your JRF interview, especially if your viva is a terrifying prospect in your future (or a bad experience in your past!). Your interviewers will not be experts in your field; you are the expert in the room. The interview is about explaining why your research is important, not accounting for its existence and expecting to be challenged on small details. Indeed, if you assume that the interviewers know more than they do, you will simply end up confusing them. Which brings me on to…

JRF interviewers, unsurprisingly, often struggle to find questions to ask on research interests that they may know absolutely nothing about. This means they often ask very generalised or inappropriate questions, or cram several questions into one. These type of questions can be daunting, and I’ve found that the best way to deal with them is to answer as you would if an undergraduate had asked you that question. Don’t be patronising, but explain your arguments clearly, and don’t be afraid to situate what you are saying in the secondary literature (before I had my first JRF interview, I wrongly assumed that you were only allowed to draw upon your own work in answering questions). If you are finding it difficult to structure your answer, or if the question is so bad that the only appropriate answer is ‘Yes, obviously’, or ‘No, you have completely missed the point’, identify the topic of the question and move out from there, rather than giving a very short answer or a long, rambling one. It helps if you’ve decided…

What are the key concerns that colleagues have had about your research when they first encounter it? What questions are you usually asked, and can you pre-empt them? What are the big, important things that your research brings to the field? Remember to think about both how your research contributes to historical (or philosophical, sociological, etc.) knowledge, and if you have made any methodological innovations, or at least consider how the methodologies you are using contribute to your findings. For this, it’s helpful if you’ve already had some previous interviews, as you will get the sense of the sort of things you are asked. If this is one of your first few interviews, try practice interviews with friends, colleagues and/or your supervisor to prepare. Once you have identified the big things you want to get across in your interview, try to be as mindful as possible in the interview itself (not easy in such a stressful situation!) to convey this information. Dreadful questions can actually be one route into doing this, if they pick up on an important topic of your research.

4. What will they want to know about?

In my experience – and this will vary – my JRF interviews have always been about the work that I have already done, not the work I propose to do in the future. This seems counter-intuitive when you have often been selected for interview on the basis of your proposed research, but remember that if you get to this stage, they have already decided that your research proposal is interesting and ambitious. They now want to know if it’s feasible; how do you respond to challenges to your research, and can you situate your work confidently within the broader field? The best way to test this is to ask you about your current research, especially the written work sample that you have submitted. Study this extremely carefully, as the bulk of the questions will often centre around this sample. But don’t forget the broader messages you want to convey, even when you’re tackling a detailed question about the choice of sources in a particular article or your engagement with a particular authority.

Some assorted observations. I’ve been interviewed for JRFs that have a teaching component. Unless you cannot answer questions about teaching at all or have no teaching experience, this won’t be a decisive aspect of the interview, so don’t worry too much about it. You may also be asked to give a short presentation at your interview; this is a brilliant opportunity to make the big points you want to make about your research, so don’t panic and remember that perfect presentation skills are not crucial for posts like this. You may be told to research all the academics who will make up your interview panel; do this, but don’t be surprised if your findings are no help at all in the interview itself. Most importantly, however…

JRFs are not gold stars. They don’t identify the top academics of their generation. If you don’t get a JRF – if you never even get longlisted for one – it is probably no reflection on you. The mythmaking that surrounds JRF positions is unhelpful to everyone, including JRFs themselves, whom I know can feel under intense pressure to justify their appointment and produce untold amounts of work during their stint. There are lots of academic posts that are just as good and just as useful in building an academic career as JRFs are. If you do get one of these fabled positions, that’s great, but if you don’t – as I haven’t – there’s no need to feel second-rate. Ultimately, a JRF is not a permanent position, and everyone will eventually be competing in the same job market again.