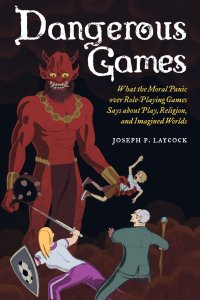 In one of the novels I’m currently working on, one of the key plotlines focuses on two sisters who create an imaginary world set in a medieval castle. They play their ‘game’, as they call it, throughout adolescence, developing a closely-knit and thoroughly-imagined cast of characters. Their ‘game’ has no rules, at least no rules that can be spoken. However, both sisters are acutely aware of when something has been said or done that violates the reality of the world in which their game is told. They’re not interested in historical accuracy, or even in strict continuity (lettuces grow in winter, monks live in a castle and most days seem to be Sundays) but they are deeply invested in the continuity of their characterisation, and the way in which it interacts with the way the castle community works. (Unsurprisingly, this plot line builds very loosely on games that my sister and I played, although sadly we never had a medieval castle!)

In Dangerous Games, philosopher Joseph P. Laycock puts forward a spirited defence of the value of imaginary role-play. The book’s ostensible focus is on religious reactions against popular RPGs such as Dungeons & Dragons (D&D), and the fears engendered by events such as the Columbine shootings that role-playing and video games can lead their participants to lose touch with reality. The central, controversial argument that emerges from his discussion is that imaginary worlds serve a similar purpose for humans to religions; they allow us to create meaning through world-building. Therefore, the people who have a problem with distinguishing between fantasy and reality are not those who play RPGs but the new religious right, who ignore the value of biblical stories as representative myths, and insist on interpreting them as the literal truth. I won’t engage with the detail of Laycock’s argument here, because I want to discuss another aspect of this fascinating, energetic and thought-provoking book; what makes a game productive and meaningful, rather than an idle amusement?

Laycock is clear that he sees collaborative creativity as central to game-playing, dismissing video games such as World of Warcraft as insignificant in this context, although he is at pains to stress that he doesn’t think such games are harmful. However, at times he seems to go even further. Dangerous Games talks about RPGs and ‘paracosms‘, detailed imaginary worlds, as if they are virtually interchangeable, and defines them in similar ways. Role-playing is valuable because ‘it combines imaginative play, which comes naturally to children, with complex rules and mathematical models’, while paracosms similarly ‘create a mental space from which the real world can be reflected upon and analysed.’ He is emphatic that you can gain new, real-world competencies through playing games, that these are not just pointless leisure activities, and I think anybody who had played such a game would agree. However, as most of his experience seems to have been focused on ‘traditional’ RPGs such as D&D rather than more nebulous paracosms, he occasionally seems to suggest that clear boundaries are necessary for the magic to happen: ‘While not all fantasy role-playing games have cumbersome rules, most cannot be played without an impartial referee who adjudiates the outcomes of the characters’ interactions within the imaginary world.’

While Laycock’s analysis of the importance of games is welcome and important, I don’t think that all play of this kind fits into his definitions. Imaginary games can be managed from within as well as from without. Some paracosms are meticulous in their concern with history, geography and language; some are not concerned with these things at all, which does not mean that they are like children’s games. Early in Dangerous Games, Laycock plays with the question of whether imaginary worlds are more like ‘a game, a narrative or a performance?’ but claims that this isn’t something that is helpful to think about too closely. To an extent, he’s right, because imaginary worlds clearly draw on all three of these categories, and this isn’t something that is difficult to prove. However, I think it is important to consider paracosms that are definitely not RPGs, and that perhaps teach different skills. World-building is valuable; but so are characters and their relationships, even if they have to get along in a world where it is Sunday every day.