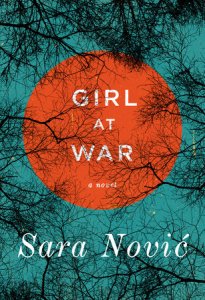 One issue I had on my previous blog was that I would sometimes become so involved with picking apart the problems in a book that I would forget to say that I liked it. The result: a series of reviews that seemed to suggest that I wouldn’t recommend anything I’d read recently to other busy, critical readers. To be clear, then; I enjoyed reading Sara Nović’s debut, Girl at War. It’s an engaging, involving and moving novel that has the welcome side benefit of teaching the reader a little about civil warfare in Yugoslavia in the early 1990s, if he/she does not already possess such knowledge. My problems with it were not because it doesn’t work as a novel; it’s almost because it works too well.

Ana Jurić is a ten-year-old girl growing up in Zagreb, largely unaware of the tensions escalating around her after Croatia’s declaration of independence in June 1991. The immediate crisis in her world revolves around her little sister, Rahela, who is chronically ill. When her family arrange to have Rahela evacuated to America as her condition worsens, they are forced to cross the border to reach a medivac station that might save their daughter’s life. The chain of events this sets in motion destroys Ana’s world as she knows it. When the narrative picks up ten years later, Ana is a college student in New York, but invitations from the UN continue to link her to her fractured childhood, despite her refusal to tell her friends about her past. Inevitably, Ana decides that she must return to a now-independent Croatia and try to put the pieces together.

This novel is incredibly easy to summarise, because its structure is so clear. This is, in many ways, a good thing; no-one wants to read a narrative that feels rambling and incoherent. Yet, Girl at War works so smoothly that it’s very difficult to forget that we are reading a constructed story. Nović effectively hides her workings, the false starts and loose ends that dog any first draft of a novel, but the result is so seamless that it almost feels mechanical. You could sit down with this novel on a creative writing course and take it apart to demonstrate three-act structure, the protagonist’s journey, the raising of the stakes. It’s so functional that the narrative is robbed of some of the emotional weight it should carry, although it did still move me. I couldn’t help thinking of Tea Obrecht’s The Tiger’s Wife when reading this novel, another story set among Balkan wars, and the richness of its multiple narratives. In contrast, Girl at War feels colourless, a little flat.

I struggled especially with the first section of this novel, and was delighted by how it picked up after the first act. War through the eyes of a child is such a familiar theme that it’s tremendously difficult to make it feel fresh. Nović does, in fact, have some interesting things to say about child soldiers, and children and violence more generally, but they come later, in the form of flashbacks. Ana, like so many protagonists, is defined by what happens to her rather than who she is as a person. This isn’t necessarily a fatal flaw – not all novels need to be character-driven – but it makes the relatively uneventful opening of Girl At War a slow read, because nothing has yet happened to Ana, and so we know very little about her. The skilful structure comes into its own at the end of the first act, when Nović employs a genuinely surprising twist, and from then on, I found the story much more gripping.

I’ll be interested to see what Nović writes next, because there’s no doubt that this is a successful debut. Her strong handling of structure, of story-form, should not be underestimated; but I wanted a little more voice, a little more personality, and I suppose, a little more heart in this novel that contains such loss.

I received a free copy of this book directly from the publisher in exchange for an honest review. It’s out now in the UK.

One thought on “Structured to the bone”